United Airlines (UAL) reported its first-quarter results on Tuesday after the closing. The company reported adjusted earnings of $0.50 per share, beating street estimates. Revenue rose 7% to $9.03 billion compared to $8.43 billion in the prior-year quarter. Top-line performance was driven mainly by a 23% increase in cargo revenues.

As expected, fuel expenses shot up 26% due to higher fuel prices, while labor costs rose modestly to 3.4% during the quarter. It’s worth noting that the first quarter is a seasonally weak one for the aviation industry due to lower number of travelers. Meanwhile, load factor rose modestly to 80.4% compared to 79.6% reported last year.

Unit revenues, a key metric tracked by the street, rose 2.7% over the prior year. Cost per available seat mile (CASM) rose 4.3% in the quarter. 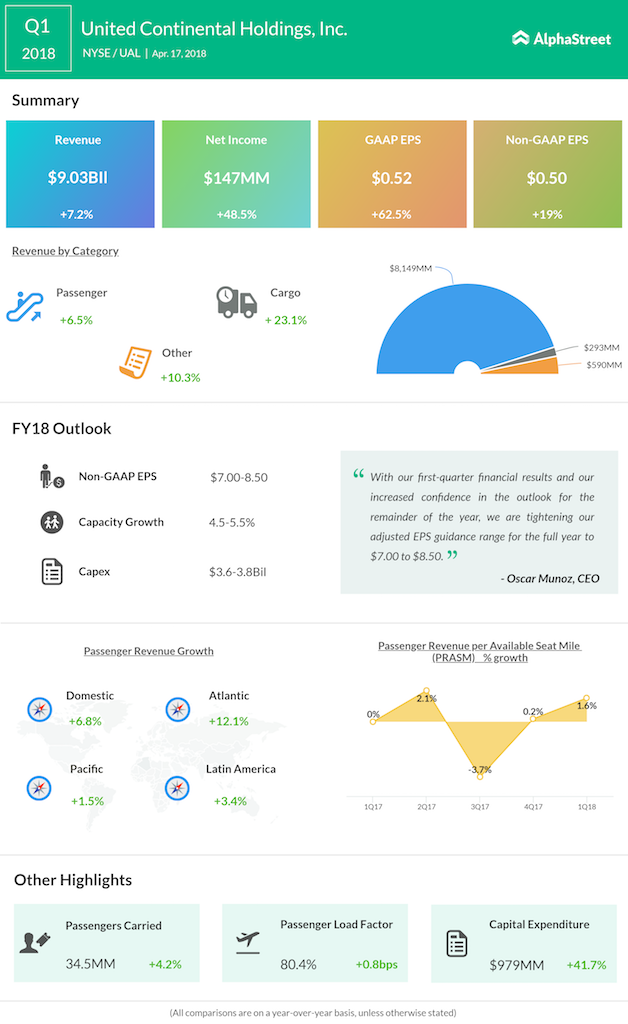 The airline has cut back its capacity expansion plan for the year. It now expects it to range between 4.5% and 5.5% compared to 4% to 6% announced in January.

For the second quarter, United didn’t provide any earnings guidance. Unit revenues are expected to rise 1% to 3%, while the capacity expansion is forecasted in the range of 4% to 5%.

The airline is more optimistic for full year 2018. It has raised the earnings guidance by $0.50 to $7 to $8.50 per share due to seasonally strong demand expected in the second and third quarters. Shares of the airline rose 2.8% in the extended trading hours