Equipment rental operator United Rentals (URI) reported better than expected first quarter earnings backed by higher rental revenue. The company, which has earthmovers, forklifts, and other heavy equipment, is facing a step back in the industry as the recent data showed weak construction spending. Shares of United Rentals inched 0.83% up after the market close on Wednesday.

With total revenue jumping 28% to about $1.73 billion, the world’s largest equipment rental company saw its earnings for the quarter soar 68% higher to $183 million or $2.15 per share. The results included a benefit associated with new tax reform. Adjusted earnings per share climbed 76% to $2.87. A climb in the volume of equipment on rent and higher rental rates helped the total revenue spurt.

The company’s rental revenue improved 25.1% helped by strong organic growth, which is led by acquisitions of NES Rentals and Neff Corp. and improving end-market demand. Time utilization fell 80 basis points to 65.2% due to the impact of NES and Neff acquisitions. Trench, Power and Pump specialty segment’s rental revenue increased by 36.5%, primarily on a same-store basis.

Looking ahead into fiscal 2018, United Rentals reaffirmed its outlook. The company continues to expect total revenue between $7.3 billion and $7.6 billion, and adjusted EBITDA of $3.60-$3.75 billion for the full year. The company reaffirmed its forecast for net cash provided by operating activities of $2.625-$2.825 billion, and free cash flow of $1.3-$1.4 billion. 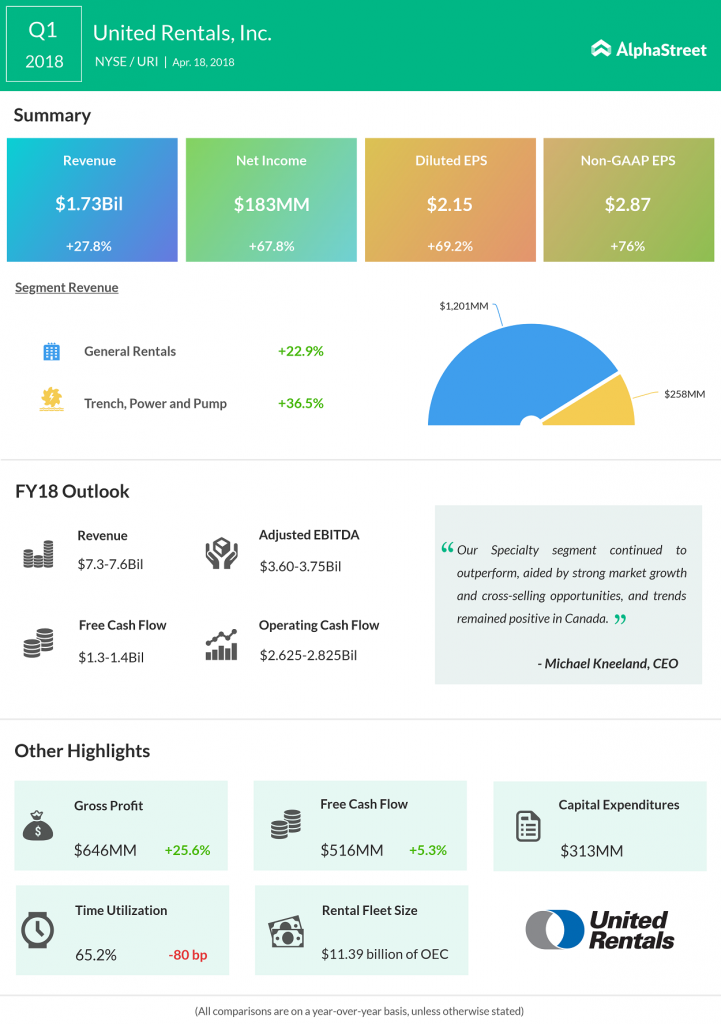 Return on invested capital for the twelve months ended March 31, 2018, grew to 9.4% from 8.4% last year, helped by the new tax reform. The company expects ROIC to increase due to the reduced tax rates materially. In addition, the board of directors authorized a new $1.25-billion share repurchase program, which is intended to complete by the end of 2019.

On the recommendation trends front, ten of the eighteen analysts are expecting a “hold” rating and six are predicting a “buy” or “strong buy” rating. On growth estimates front, the consensus is seeing a 39% growth during the current year and a 10.60% jump in the next year.

United Rentals can weather US-China trade war tensions as it focuses on the domestic market. The company has 91.5% of its sales coming from the US and the rest from Canada. The company gets 50% of orders from industrial and non-construction rentals, and 46% from commercial construction. CNBC’s Jim Cramer found United Rentals, the stock, and the company, to be much more attractive than Caterpillar (CAT).