Multinational financial services firm Bank of America (BAC) topped analyst expectations by posting a 30% growth in its profit during the first quarter of 2018. The banking giant posted net income of $6.9 billion vs $5.34 billion in the prior-year period. The company’s EPS also jumped 38% from $0.59 in the prior-year to $0.62.

The bank run by CEO Brian Moynihan reported revenue of $23.1 billion, up 4% on a year-over-year basis. Net interest income rose 5% to $11.6 billion mainly due to benefits from higher interest rate as well as loan and deposit growth. Meanwhile, the bank saw just 3% rise in its noninterest income.

“This was a strong quarter. Revenue was up 4% year-over-year and expenses were down 1%, making this the 13th consecutive quarter of positive operating leverage. We also carefully managed credit costs. We also returned $6.1 billion in capital to our shareholders through dividends and common stock repurchases,” said CFO Paul M. Donofrio. 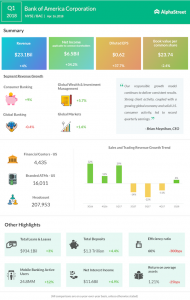 The bank’s largest unit — Consumer Banking —reported a sharp 9% jump in its revenues to $9 billion during the quarter. Net income rose 42% to $2.7 billion as loans and deposits improved 8% and 6% respectively.

This was followed by a 6% revenue growth in Global Wealth and Investment Management segment and net income growth of 34% to $1 billion. Loans in this segment increased 7% to $159 billion.

Sales and trading revenue increased by 6% to $4.1 billion due to improved trading activity triggered by trade war concerns.

It may be noted that Bank of America is one of the largest beneficiaries of Donald Trump’s Tax Cuts and Jobs Act, due to higher amounts of overseas profits. Also, a lower tax rate has already started boosting the earnings of the banking industry as a whole this year.

During the first quarter of 2018, the banking giant said that its credit quality remained strong across both its consumer and commercial portfolios. The provision for credit losses remained stable at $834 million.