US economic growth to rebound in Q2

Amidst escalating trade tensions between the US and China, economists have expressed optimism over a strong economic rebound the second quarter. AllianceBernstein believes that firm global economic growth, modestly above trend, should continue in 2018, with some moderation likely to be seen in 2019.

In the first quarter, GDP was revised down to a lackluster 2% from 2.2% pace reported in May due to weaker consumer spending and a smaller inventory build than estimated. The second quarter’s economic growth forecast is based on strong business investment, tax cuts, and consumer spending. 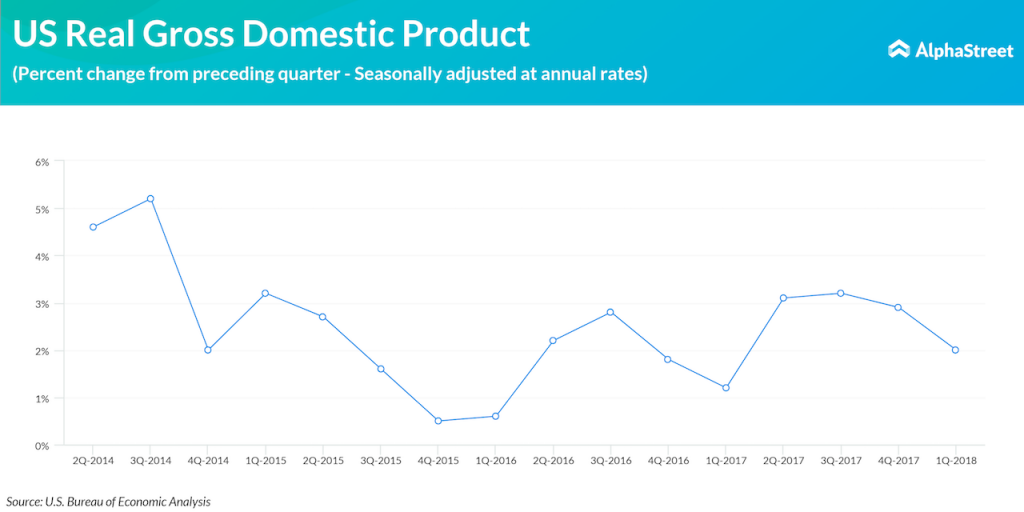 Experts at Focus Economics believe that the business sentiment and investments could be hurt due to a major downside risk arising from the acceleration of the dispute with China into a trade war. In the medium term, growth should further be dampened by quicker monetary policy tightening and high fiscal deficits.

The economists expect GDP to expand 2.8% in 2018, unchanged from last month’s estimate. In 2019, growth is seen moderating to 2.4%. The economic growth is invariably being driven ahead by current innovation, research, and development as well as capital investment.

The US economy is still recovering from the problems that led to a major recession in 2008, including high consumer debt, tax government regulation, low-interest rates, mortgage lending and excessive risk-taking in the financial sector. Expansionary monetary policies had supported the economy, including holding interest rates at lower bound and quantitative easing.

According to AllianceBernstein, the Federal Reserve will continue to tighten monetary policy with the Fed funds rate expected to be 2.38% at the end of 2018 and 3.38% at the end of 2019. The need for policy action would be minimized due to lesser market-driven tightening of financial conditions.

In the years ahead, a higher level of inflation is on the cards as long-term structural factors are pointing to a rise in inflation risk. Also, AllianceBernstein believes the key market risks include the prospects of a US-led trade war and uncertainty surrounding European politics.

In addition, the minutes of the Fed’s June meeting stated that the central bank plans to move ahead with interest rate hikes despite mounting trade war concerns. The Fed expected to increase interest rates four times instead of three in 2018 while sticking with three in 2019.

The minutes also stated that in the recent months, the labor market conditions continued to strengthen and the real GDP appeared to be increasing at a solid rate in the first half of 2018.

Following these, the US economy is expected to rebound strongly in the second quarter and this trend will continue modestly in 2018.