US retail sales beat expectations in May

US retail sales growth blew past expectations in May, primarily due to increased sales at gas stations, home centers, restaurants, and clothing stores. This rise further indicates a shift towards stronger economic growth.

According to the report released by the Commerce Department, overall sales jumped 0.8% from April 2018 to $502 billion, marking the highest increase since November 2017. Meanwhile, in the past one year, retail sales jumped as much as 5.9%. Sales growth in April was revised to 0.4% from 0.2%, to reflect the changes in the way the government calculates the figures. 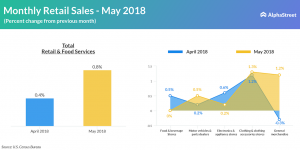 After a sluggish first quarter, growth in consumer spending is now expected to lift the economy. For April-June, analysts expect growth rate to touch 4.6%, an increase of 2.2% from first quarter.

In May, auto sales witnessed 0.5% growth and made up for one-fifth of the total retail spending. Sales at gas stations rose 2%, and home and garden sales rose 2.4%. Strong sales were also seen at restaurants and clothing stores, each of which recorded 1.3% improvement.

Sales at building material stores offset its 0.8% fall in April with a 2.4% growth in the month of May. The next report will be published on July 16, 2018.