WD-40 Company (WDFC), the manufacturer of the iconic rust-remover sprays, posted its highest ever quarterly earnings in the second quarter as net sales crossed the 100-million dollar mark for the first time. While the earnings numbers surpassed estimates, sales fell short of expectations.

Following the announcement, shares of the company which grew more than 13% since January slipped in after-hours trading on Thursday but pared most of the loss later amidst high-volume trading. The stock was down about 4% during the morning trading session today.

Encouraged by the impressive results, the company upgraded its earnings and sales guidance for fiscal 2018 above analysts’ consensus estimates. 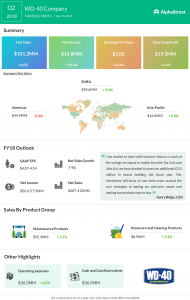 Earnings per share climbed 21% year-over-year to a record high of $1.05 in the second quarter, helped by a decrease in income tax provision. Benefitting from favorable foreign currency rates, sales advanced 5% to an all-time high of $101 million, which however came in below estimates.

The company is looking for consistent organic sales performance in the remainder of fiscal 2018. The long-term target is to generate $700 million in net sales by the end of 2025, which will be achieved through additional investments in brand building, with focus on enhancing global digital presence.

Also, plans are afoot to make proactive price adjustments in the coming quarters to defend any stress on gross margin from the ongoing volatility in raw material prices, especially those of oil and steel. While maintaining the goal of bringing down the costs of doing business to 30% of sales, the company said additional investments in advertising and promotional activities this year would add to costs in the near term.

During the quarter, WD-40 rolled out its new product named WD-40 Flexible, which is known as WD-40 EZ Reach in Europe. The San Diego, California-based company also repurchased more than 61,000 shares for $7.5 million.

“As we look to the remainder of fiscal year 2018, we’ve updated our fiscal year guidance to reflect updated foreign currency exchange rates, higher input costs, our revised effective tax rate as well as the changes we are making to our advertising and promotion investment this fiscal year,” said CEO Garry Ridge.

Among WD-40’s peers, A. Schulman (SHLM) last month reported an increase in second-quarter earnings and sales, while Advanced Emissions Solutions (ADES), another player in the segment, posted sharp declines in both profit and revenues for its most recent quarter.