Banking giant Wells Fargo (WFC) reported downbeat results both on earnings and revenue front amid the pressure from the federal regulators. Revenue dropped 3% to $21.6 billion compared to the year-ago quarter. Profit fell 11% to $5.2 billion and on a per share basis earnings dropped 10% to $0.98. Average loans and average deposits declined 2% and 1% respectively, while net interest income grew 1% in June quarter.

“Net interest income grew both linked quarter and year-over-year in the second quarter, credit performance and capital levels remained strong, and we are on track to meet our expense reduction expectations,” said CFO John Shrewsberry. 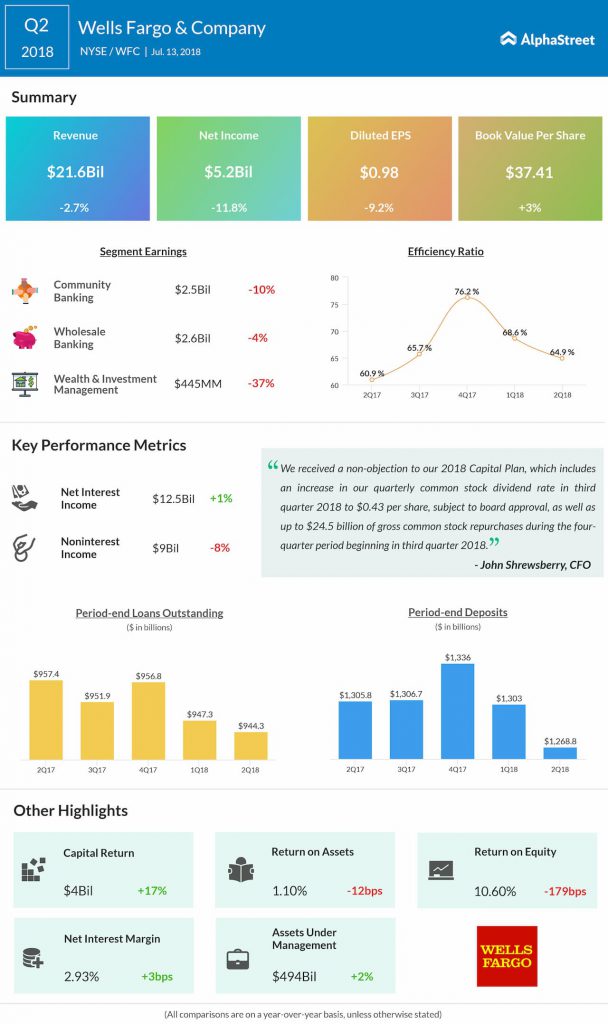 The troubled financial services company, which was slammed with a $1 billion fine recently by the federal regulators, has hired Amanda Norton as its Chief Risk Officer in May. The company was accused of mis-selling its products and for having fake accounts.

Wells Fargo stated that it is currently in the process of revising and implementing new policies, practices and procedures, including those relating to pricing in the FX business. In the second quarter, the company realized $171 million in customer remediation and rebate costs.

The San Francisco-based company admitted that there have been instances of incorrect fees being applied to certain assets and accounts, which resulted in both overcharges and undercharges to customers in Wealth and Investment Management business. It added that $114 million had been refunded to the overcharged customers who were affected at any time during the past seven years.

As part of 2018 capital plan submitted to the Fed Reserve, Wells Fargo expects to increase its third quarter dividend to $0.43 per share from $0.39 per share, subject to the Board’s approval. This plan also includes the stock repurchase of up to $24.5 billion for the four-quarter period from third quarter 2018 through second quarter 2019.

Shares of Wells Fargo dipped 3% in the pre-market trading session today and continued to trade in red during the morning session. Meanwhile, its peers Citigroup (C) stock was down about 3%, PNC Financial (PNC) slid about 1% and JP Morgan Chase (JPM) was trading flat during the morning session after they announced their quarterly results today. Overall, the banking sector results failed to impress the investors today.