Bank holding company Wells Fargo (WFC), which has been under probe by many federal and state regulators for the last couple of years, reported preliminary revenue and earnings figures for the first quarter beating consensus estimates, contrary to last quarter’s numbers where the company missed on expectations. The results are subject to change as the regulators are seeking for a $1 billion penalty over a probe on the bank’s wealth management unit.

Profit of the banking giant jumped 5.2% to $5.9 billion, while diluted earnings per share increased 8.7% year-over-year to $1.12. Revenue came in at $21.9 billion, down 1.7%, weighed on by the weak level of activity in the U.S. mortgage industry over the last few quarters.

In line with expectations, Wells Fargo’s average loan growth for the quarter declined 1%, hit by seasonally depressed mortgage origination and credit card balances. Average deposits also took a hit, though marginally, down by $2 billion or 0.5% to $1.3 trillion, driven by a decrease in commercial deposits primarily from financial institutions. 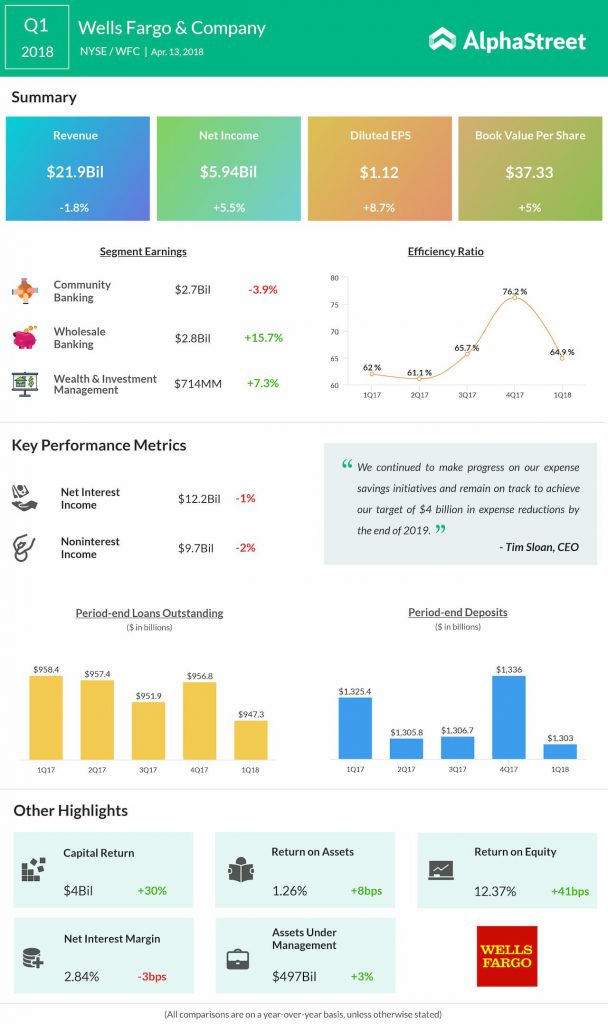 The company focuses mainly on mortgage industry where it makes a major chunk of its interest revenues. According to the Mortgage Bankers Association analysis, total mortgage origination volumes declined from $361 billion in the first quarter of 2017 to $346 billion in the first quarter of 2018. In line with the industry trend, net interest income and non-interest income trend declined 1% and 2% respectively to $12.2 billion and $9.7 billion.

Wells Fargo stock jumped as much as 2.5% in pre-market trading after the California-based finance company reported results that topped consensus estimates.