For Roku, Inc. (NASDAQ: ROKU), 2020 was a crucial year as the video streaming platform took advantage of the shift in people’s content consumption patterns during the pandemic. The company seems to have settled in the positive territory after a prolonged losing streak. The turnaround, which came as a surprise to many, was driven by the spike in media consumption during the shutdown.

Meanwhile, going by the management’s cautious outlook, the recent improvement in financial performance was not sustained in the early months of 2021, despite active accounts climbing to a new high. After hitting a record high a month ago, Roku’s shares have entered a downward spiral and lost about 28% since then, easing concerns about the relatively high valuation.

But the slowdown cannot last for long, considering the unfolding opportunities in the streaming space. That means the stock is on track to regain the lost strength and hit a new record this year. While it is not fully immune to the market-volatility, the recent pullback can be considered an investment opportunity.

The Silicon Valley-based digital content aggregator stands out in the segment by operating as a one-stop destination for all digital content, including ad-supported and premium movies and TV shows. Since the lion’s share of the revenue comes from advertising, the company keeps incorporating more ad-supported services that can create value for both customers and media publishes. Though TV advertising is yet to keep pace with the transformation the streaming market is witnessing, it is expected to catch up soon. 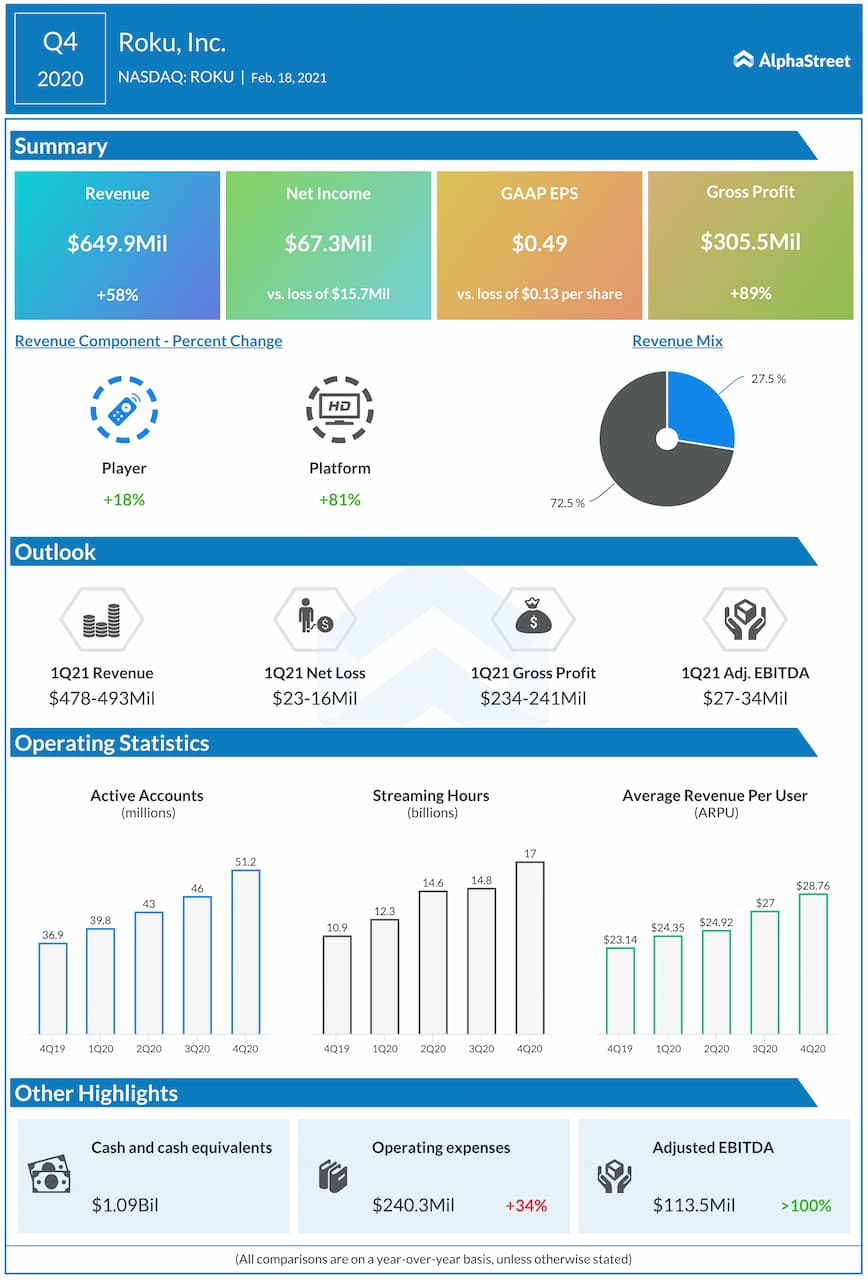 With ad spend drifting from linear TV to OTT and other digital platforms, Roku needs to better leverage its strong user base and further expand the market with a focus on the emerging avenues. Recent developments indicate the company is already moving in that direction. It needs to be noted that the Roku channel and hardware offerings like media player and smart TV OS give the company a competitive advantage. Though management has ambitious plans for international expansion, the progress on that front has not been very encouraging.

For the first time since going public, the company recorded a profit for two consecutive quarters in the second half of last year. It posted earnings of $0.49 per share for the December-quarter, defying analysts’ expectations for a loss. The improvement is attributable to record expansion of the core platform segment that drove up total revenues to $650 million, which is up 58%.

Monetized video ad impressions were up over 100% in Q4 rebounding to pre-COVID growth levels. Across the industry, the impact of streaming is increasingly evident. Consumers are cutting the cord, fully a third of all American homes are now non-Pay-TV households. Leading media companies are reorienting around streaming and launching new streaming services. The traditional TV upfronts are beginning to crumble as advertisers demand more flexibility, better measurement and a broader audience.

Continuing its pursuit for original content, Roku this week acquired TOH Intermediate Holdings, the company that holds the rights for This Old House — a highly popular home improvement show. The content library and the episodes in the pipeline should catalyze revenue growth, given Americans’ growing penchant for DIY and home improvement activities.

The market responded positively to the deal, which was hailed by analysts. Roku’s stock closed the last trading session sharply lower but regained strength in early trading on Wednesday. Its value grew around fourfold in the past twelve months.

Check out your one-source destination for all publicly listed earnings conference calls.