Who is leading the self-driving car race?

Driverless cars are said to be the future of transportation. No wonder why we see many automakers and tech companies pumping billions of dollars into this category. According to the Boston Consulting Group (BCG), the self-driving market is forecasted to be worth $77 billion by 2025. And so everyone is scrambling to grab their share of pie. The companies that are involved in making self-driving cars are Tesla (TSLA), Intel (INTL), Uber, Waymo, and General Motors (GM). The most visible competitors in this space are Uber, Tesla, and Waymo. Let’s analyze their positions in the self-driving vehicle industry.

When it comes to autonomous technology, Tesla’s Elon Musk has been one of the most vocal entrepreneurs. And considering the significant experience, Tesla has in manufacturing cars, it appears that Tesla is well-positioned to take the lead, especially after it rolled out the Autopilot feature in 2015 under the partnership of Mobileye. But after their split in 2016, Tesla has been struggling to recreate a similar autopilot version. Though it managed to recreate another version, it lacked several functionalities. 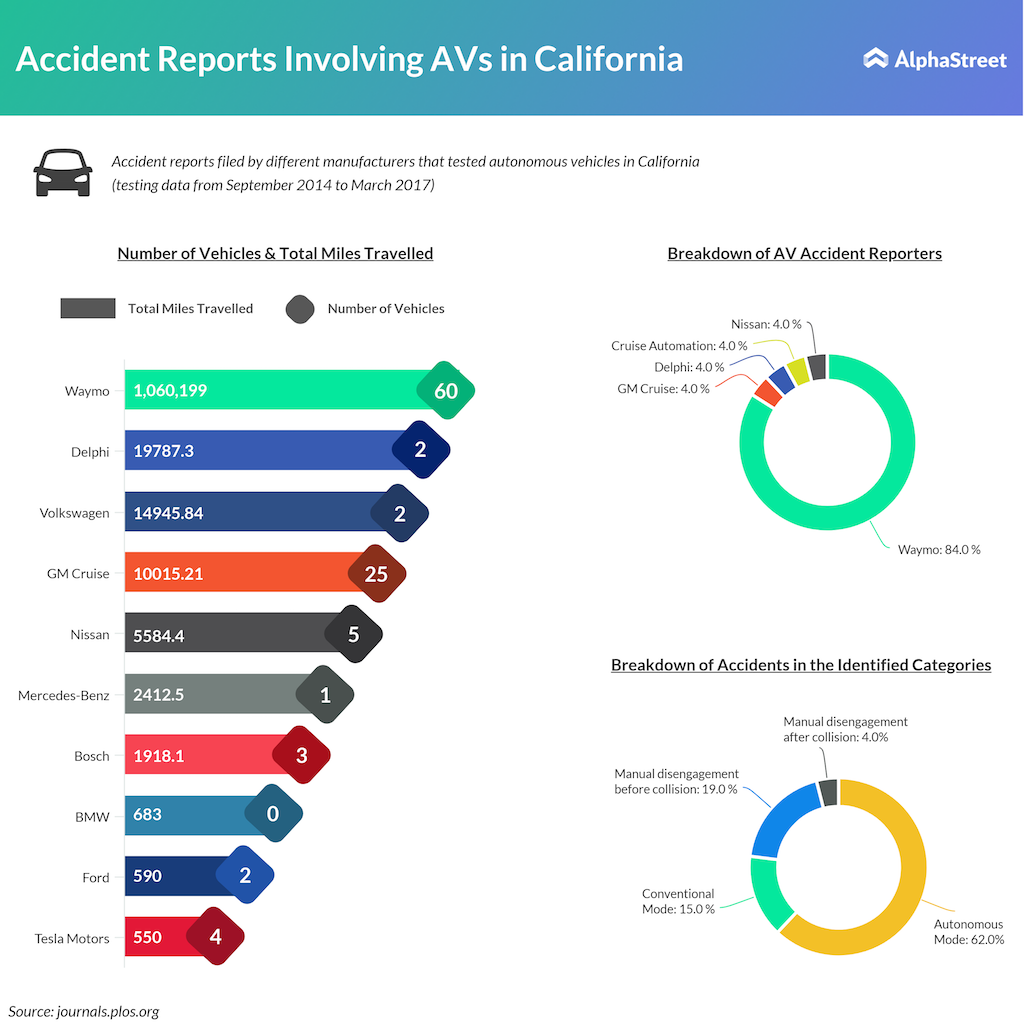 Last year, Musk set a timeline of two years for complete self-driving capabilities. But with no strong autopilot development and a lack of certain key components (being able to detect speed and other vehicles), it’s difficult to say how the company’s self-driving efforts play into Musk’s timeline. Tesla vehicles do not use Lidar sensors, as Musk is not an ardent fan of Lidar. Instead, his self-driving vehicles are based on cameras. On the contrary, other automakers believe that lidar sensors offer an extra margin of safety. Tesla might eventually lag behind if it fails to deliver on its promises.

In fact, Tesla’s biggest rival Waymo relies heavily on Lidar sensors. Google’s Waymo had sued Uber over self-driving car secrets, of which lidar sensors was one, marking it as a first-ever legal battle over autonomous vehicles. The self-driving unit of Alphabet has been a leader in driverless software. Last year, the company unveiled its plans to begin testing the driverless cars. The only drawback is that the company lacks an experience in manufacturing cars. Waymo began addressing this issue, by striking a couple of small deals like its recent deal with Fiat Chrysler.

Take a look at one of the promising video by Waymo:

It was also reported that Waymo plans to purchase nearly 20,000 electric cars from Jaguar Land Rover and install its software in the vehicle, thereby expanding its self-driving services. Further, Waymo’s strength in artificial intelligence makes it a front-runner. A recent prediction by the UBS investment bank claims that Waymo is on track to own nearly 60% of the global driverless market. The bank also claims that the driverless industry would generate revenue of about $2.8 trillion by 2030.

This prediction might come true as Waymo gained an edge after hiring a former Tesla executive Matthew Schwall to look after the self-driving safety policy. This would be a masterstroke move for Waymo as public safety has been a major question looming the industry after the recent accidents involving self-driving vehicles.

Waymo was even the first company to launch an advertising campaign to promote self-driving. The company’s aggressive plans are all the more striking given the setbacks faced by other rival companies, especially Uber.

After the fatal crash in Arizona, Uber’s major plans of driverless cars was eventually falling apart. CEO Dara Khosrowshahi even considered shutting down the self-driving car program. The company has temporarily put a pause on all its self-driving operations. These challenges are a nightmare for Uber, who is clearly lagging behind its competitors.

Will Autonomous crashes derail adoption of this novel technology?

According to the U.S. National Highway Traffic Safety Administration, more than 100 people are being killed every day in the US in motor-vehicle accidents. And self-driving cars are expected to dramatically reduce the rate of accidents. But the recent fatal crashes involving Uber and Tesla’s self-driving vehicles gives rise to questions about the safety of self-driving cars. Will such incidents that involve death and tragic will be reduced in the future?

Despite these problems, self-driving cars seem to be inevitable. Uber made a sensible move of halting operations. Tesla, on the other hand, has been sharing the details of the accident to influence the public perception. A survey by ReportLinker found that Tesla stood as the most favorite brand among customers when asked about autonomous vehicle. While most will be benefited with this novel technology, many will be left behind.