Why it pays to put your money in digital payment stocks

The shares of Mastercard (MA) and Visa (V) have witnessed an almost similar trading pattern over the years, all along maintaining a steady uptrend. Both stocks reached fresh peaks this month. Mastercard’s stock gained about 45% so far this year and Visa increased 29%, outperforming the industry.

Industry watchers believe Mastercard has an edge over Visa due to its growing presence in Europe and Asia, especially in the growth markets.  So, when it comes to consumer growth, Visa lags behind its closest rival. Among the other payment processors, American Express (AXP) stock hit an all-time high last week and is currently hovering near the $110-mark.

The long-term trend indicates the stocks will continue the winning streak in the near future, and most analysts have raised their price targets. The payments sector is thriving on the bullish consumer sentiment amid falling unemployment and improving wages.

Pros to look for

While factors like the steady economic growth and the tax cut rolled by the government last year catalyze households’ spending power, card companies benefit from the fast adoption of digital payment and technical advancements like Internet of Things and AI-assisted payment service. Interestingly, blockchain technology is emerging as the new fad among credit card companies due to the high speed and security it offers.

Mastercard has an edge over Visa due to its growing presence in Europe and Asia, especially in the growth markets

Underscoring the trend, the latest retail sales data shows a noticeable increase in digital transactions, for which customers mostly user the platforms of Mastercard and Visa. It is estimated that in the next three years e-commerce will account for nearly 15% of all retail sales in the US; that is some good news for the payment service providers. It shows the sector is on the threshold of a boom era with multiple tailwinds and absolutely no challenges. 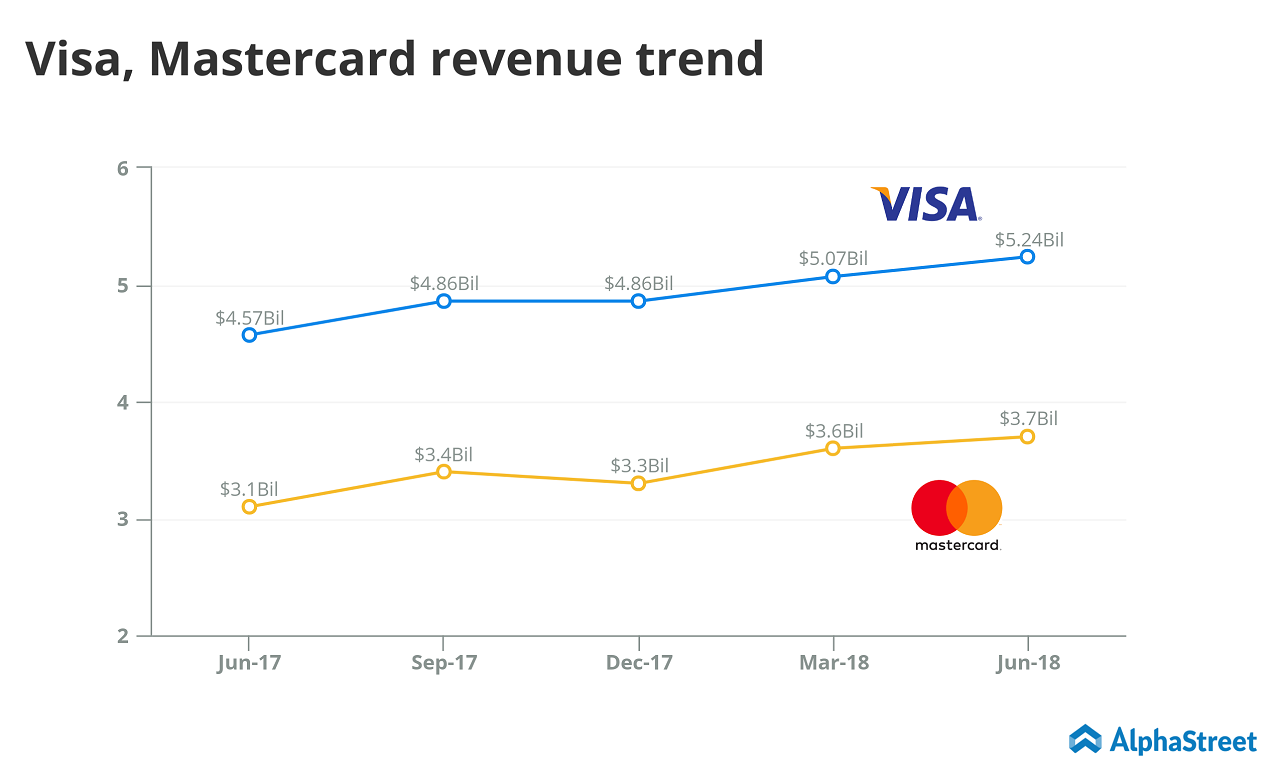 Meanwhile, banks led by Mastercard (MA) and Visa (V) this week reached a settlement with merchants on a prolonged dispute over the fees charged on card transactions. As per the terms of the settlement, the credit card companies agreed to pay $6.2 billion, of which $5.3 billion has already been paid. Others involved in the case are Bank of America (BAC), JPMorgan Chase & Co (JPM) and Citigroup (C).

The merchants who initiated the litigation had alleged they were coaxed into paying swipe fees by denying customers other payment options, in violation of the antitrust law. A compromise was reached in the 13-year-old case after the Jury quashed an earlier order, which according to the court violated the antitrust norms. The share of Mastercard in the settlement amount is $108 million, while Visa will be coughing up about $4.1 billion.

In the second quarter, Mastercard’s (MA) earnings increased and surpassed estimates, helped by strong revenue growth amid higher switched transactions and cross-border volumes. Visa reported a 40% annual increase in earnings for the June quarter when the company’s top-line witnessed yet another double-digit growth. The results exceeded Wall Street forecasts.