Why you should probably sit through the next market crash

Renowned economist Ted Bauman recently sent shockwaves across the markets when he predicted a market crash with a 70% collapse as early as next month using a slew of charts to make his point clear. The fact that Bauman is the very same economist who accurately predicted the 1999 and 2007 collapses make this prophecy a bit disturbing.

A few other experts have also raised similar concerns, including Former Director of the Office of Management and Budget, David Stockman, who said an economic crash might be imminent.

But should you be worried? Probably not! 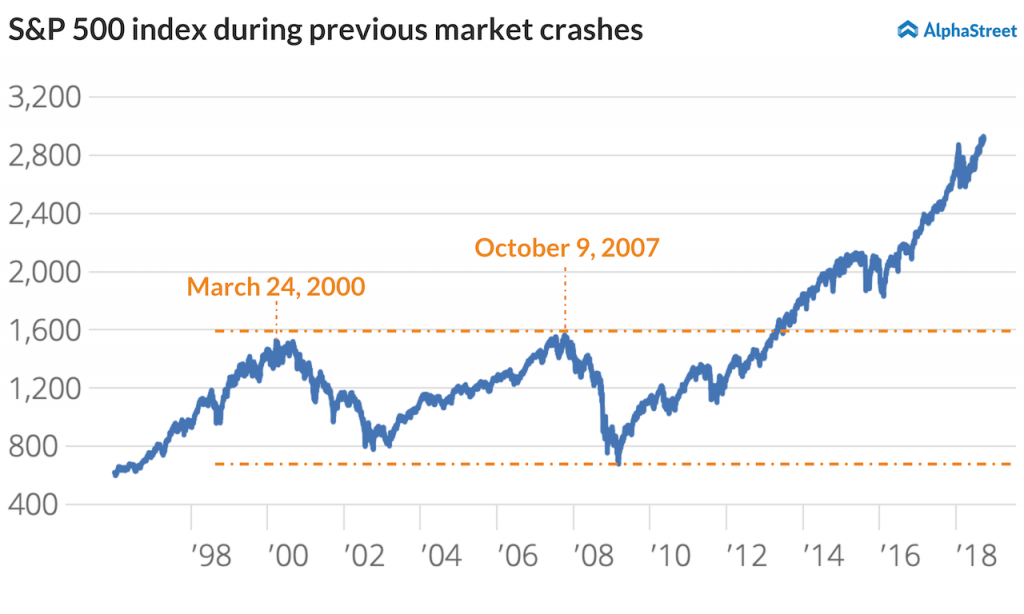 While various factors – an extraordinarily long bull market, the rampant influx of foreign funds and high valuations in real estate – point to a pull-down, we don’t expect it to be as devastating as its predecessor.

Many individuals and businesses had gone bust during the Great Recession of 2007-08, so its natural there is a sense of panic in the air. However, we have learned at least a couple of lessons from eight market crashes in the last century, and these will guide us through the difficult phase.

Since the Great Recession, the financial system of the country has somewhat matured, thanks to the introduction of tight regulations including Dodd Frank and Basel III with the sole agenda of preventing bundling of mortgages, and in turn another crisis. While there still are plenty of risky loans today, these are not big enough to cause an economic meltdown.

Separately, there are the annual stress tests conducted on banks by the Federal Reserve to analyze their vulnerability to a financial crisis. All partaking banks had cleared the most recent edition of the stress test, evidencing they have enough liquidity to withstand a market crash.

So how do you react to this? The initial reaction towards a market crash prediction would be selling off all the assets. There are two reasons why this approach is not ideal. One, the market is a tricky place, which quite often messes with predictions. Even in 2012, speculations were rife that a market crash was imminent, but nothing of that sort happened.

The financial system has somewhat matured, thanks to the introduction of tight regulations including Dodd Frank and Basel III with the sole agenda of preventing bundling of mortgages.

This time around, the chances of a bear attack are higher, and yet, these are still speculations.

The second reason is that it is impossible to predict the beginning of a bull market. By sitting through the crash, you are basically ensuring that your investments are safe and rolling. History teaches us that stocks rally back to their old levels, given some time. Also, stock crashes in the last 100 years have lasted an average of just over ten months. So if waiting is an option, it would be the best one.

But don’t be paranoid either over the inaction. In fact, certain individual stocks are apparently overvalued with unreasonable PE ratios – including Amazon (AMZN) and Netflix (NFLX) – that have the right ingredients to form a bubble. Now don’t get this wrong. We are not saying that Amazon or Netflix is a bubble, but given a potential crash, it would be wise to stay away from overvalued stocks.

With a little bit of portfolio rejig, giving more exposure to high-dividend stocks or low-risk ones including those from consumer, pharma and food industries, your money should be fine.

We are better prepared for a crash this time than we were any time in history. And now we act.