Yelp (YELP) reported its first quarter results after the bell. Revenue improved 13% to $223 million beating analyst estimates, primarily driven by advertising revenues. The review site narrowed its loss to $0.03 per share compared to $0.05 in the prior year period. Post the results, share price plunged 4% in extended hours of trading.

The company derives most of its revenue from advertising. Advertising revenues grew 20% to $214 million, driven mainly by increased investments in sales personnel. The transition from fixed-term contract to flexible contract is working well for the company. The number of paying ad accounts rose 27% to 177,000, adding 14,000 accounts sequentially.

Transactions revenue came in at $4 million, compared to $18 million in the prior-year quarter. The huge drop in revenues was due to the exclusion of Eat24 revenues, which was sold to Grubhub (GRUB) last year. The company expects to earn nearly $10 million from transaction fee for the year. 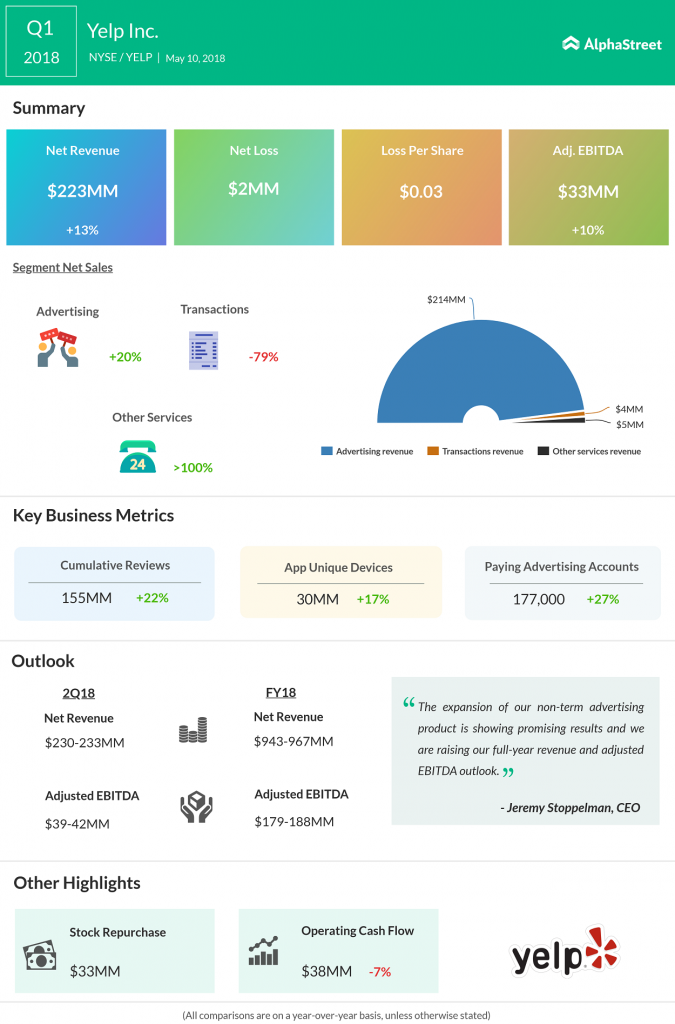 Last year, Grubhub paid $288 million to acquire Eat24 directory. As part of the deal, both the companies extended their partnership this year where Yelp will get a fee for each order placed through its app or website from Grubhub. The listing site has seen increase in food orders and customer retention rate, which is going to bode well in the long term. It expects to earn $1 million to $2 million as fee from the partnership next quarter.

Yelp also has been investing in Reservations and Nowait, which seem to be bearing fruit as the number of customers booked using Yelp has grown 27% sequentially.

Based on the strong first quarter results, the company raised its outlook. Second quarter revenues are expected to come in between $230 million and $233 million and adjusted EBITDA in the range of $39 million to $42 million.