After the WarnerMedia spin-off, what awaits the new AT&T (T)

AT&T will be publishing its second quarter 2022 earnings report on July 21, before the market opens

Electronic communication has emerged as one of the fastest-growing industries over the past two decades, with new opportunities like media streaming and 5G technology accelerating the growth. The demand for better and faster networks and quality content keeps increasing, signaling a bright future for telecom majors like AT&T Inc.  (NYSE: T).

After effectively dealing with economic uncertainties and the general market slump, AT&T is on the road to a major transformation after spinning off the WarnerMedia business a few months ago. The market will be closely following its performance post the $43-million deal. Naturally, people will be looking for positive cues from the spin-off before making their investment divisions.

Investors’ response to the news has been positive, and the stock maintained an uptrend since then. T has remained surprisingly resilient to the recent market selloff. Besides the cheap valuation, prospective investors have other reasons to own the stock, and the company’s high dividend is one of them. While the attractive yield makes it one of the best dividend stocks, the management is exploring all options to return value to shareholders.

Meanwhile, proper allocation of capital is crucial for AT&T, which has accumulated a huge debt in recent years. Stable cash flows enabled the company to repay a part of the debt this year, but the lingering COVID uncertainties and macro issues remain a risk as far as its financial health is concerned. Also, in the absence of the WarnerMedia assets, this year the company will be earning less than what it did last year. 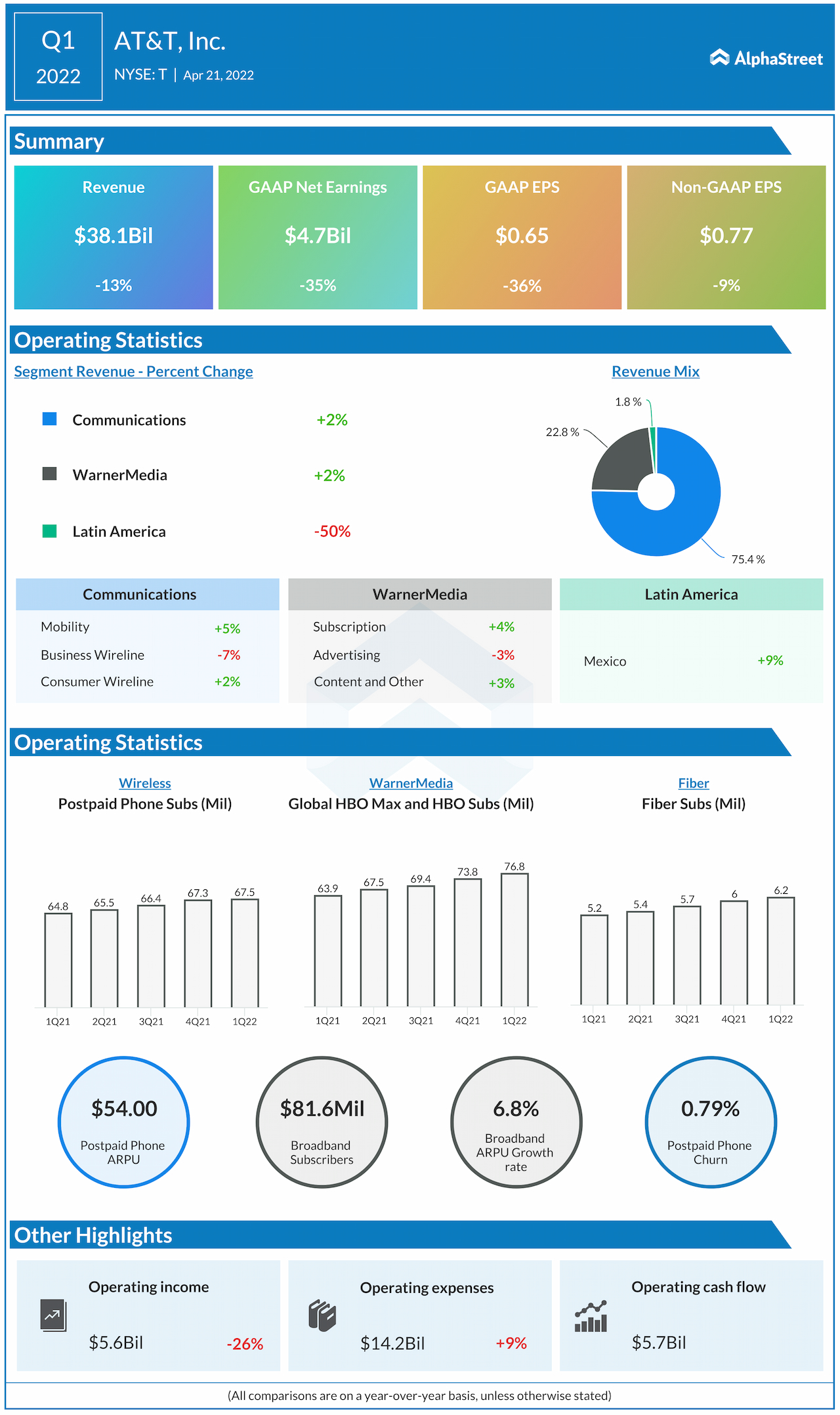 Earlier this year, AT&T completed the separation of its entertainment division WarnerMedia, which became a part of Discovery Inc. through a merger. The deal is part of the AT&T management’s efforts to streamline the business and focus more on the wireless division, especially on growth areas like 5G.

“We now have the right asset base and financial structure to devote our energy to become America’s best broadband provider. Over a 5-year period, we expect a five-fold data increase on our networks and we plan to capitalize on the growing desire from consumers and businesses for ubiquitous access to best-in-class connectivity solutions. The results we’ve achieved the past 7 quarters, all while undergoing a significant repositioning of our business give me confidence that we can accomplish this goal,” said CEO John Stankey recently.

At the end of the March quarter, AT&T had a total debt of above $180 billion, which is up 12% from the prior year. After expanding steadily, the subscriber base became even bigger in the first three months of fiscal 2022. But that did not add much to revenues, which dropped 13% to about $38 billion. Consequently, adjusted earnings declined to $0.77 per share in the first quarter. The company will be publishing second-quarter results in the pre-market hours on July 21.

Netflix, Disney: A look at the trajectory of the streaming services market

AT&T’s stock has traded below its long-term average throughout this year, despite gaining about 7% during that period. It hovered near the $20-mark early Tuesday, after closing the previous session a bit lower.