A further spike in ad sales lifted Google parent Alphabet’s (GOOG, GOOGL) earnings in the second quarter, when the company suffered a setback in the form of a multi-billion fine from European Union regulators for allegedly abusing the Android operating system. Earning excluding the fine came in above analysts’ estimates, triggering a stock rally. 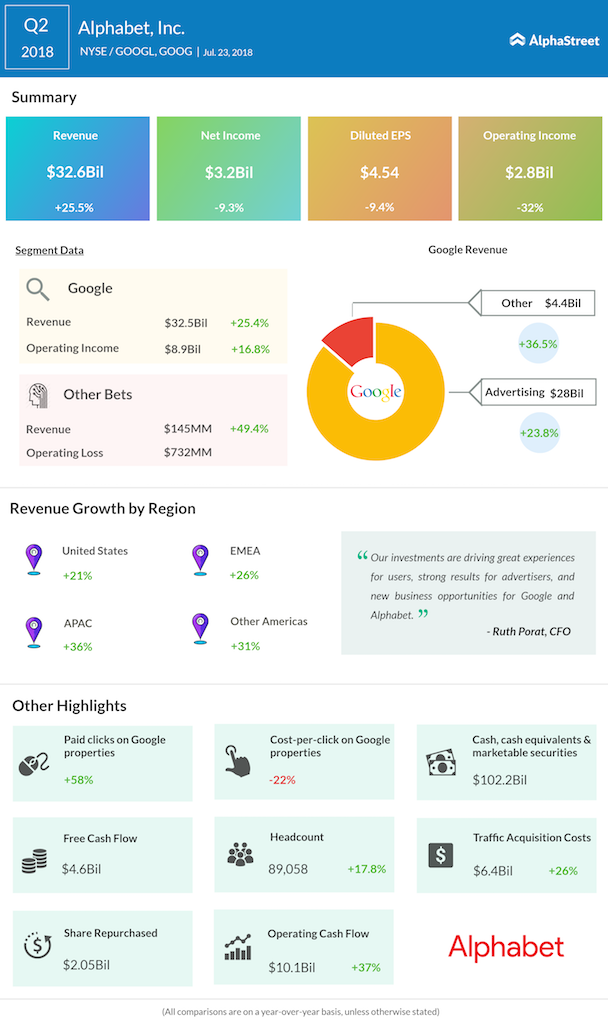 Driving the earnings growth in the second quarter, total revenues jumped 26% annually to $32.66 billion. Search service division Google continued to lead the growth, registering a 25% increase in revenues to $32.5 billion. The major chunk of search revenue came from advertising, which advanced 24%.

Alphabet’s robotics division Other Bets, which has been struggling to achieve breakeven for the past several quarters, registered a wider operating loss despite a 50% increase in revenue. Other Bets became a less significant segment after Nest was removed from it and incorporated into Google recently. Typically, the company’s non-core businesses have minimal impact on overall profitability, which is driven by programmatic advertising and mobile search.

Continuing the recent trend, traffic acquisition costs climbed 26% to $6.42 billion during the June-quarter. Paid clicks, a measure of ad consumption on the site, advanced 58%.

While Google continues to rule internet search, there are concerns that the latest EU ruling would change the way mobile search works, considering the order that requires the company to make major changes to its business practices involving Android. Alphabet is preparing to appeal the ruling.

The company’s stock gained more than 4% in the after-hours trading Monday following the earnings announcement.