AMD Stock: Is it the right time to invest in Advanced Micro Devices?

Over the years, Advanced Micro Devices Inc. (NASDAQ: AMD) has emerged into a semiconductor firm focused on enterprise products, from a provider of PC and gaming chips. But the company’s performance at the stock market has not been very impressive this year, with the recent tech selloff adding to the weakness.

But the stock is expected to change course in the coming weeks and regain lost momentum as the year progresses – with estimated gains of about 31% in the 12-month period. So, this is a good time to buy the stock, making use of the unique opportunity brought by the decline.

After the drop, the valuation has become more favorable, especially for prospective investors who were concerned about the high price. In recent years, AMD had traded at a high premium compared to its peers, but the company’s strong fundamentals and solid performance justify that.

Those who have been holding the stock for long — enjoying the company’s rapid growth that often gave stiff competition to market leader Intel Corp. (NASDAQ: INTC) — remain happy despite the slump. The company’s total addressable market has grown steadily, and the recent acquisition of Xilinx is expected to add to that.

The Xilinx buyout should make AMD more agile and flexible as the high-value deal is immediately accretive to both revenues and earnings. The increased ability to allow customization, combined with the impressive product roadmap with focus on the EESC segment and transition to next-level ZEN architecture, could accelerate growth going forward. Of late, AMD has been expanding its footprint in the enterprise space, which would make it better equipped to meet the high chip demand driven by the uptick in tech spending in that area. 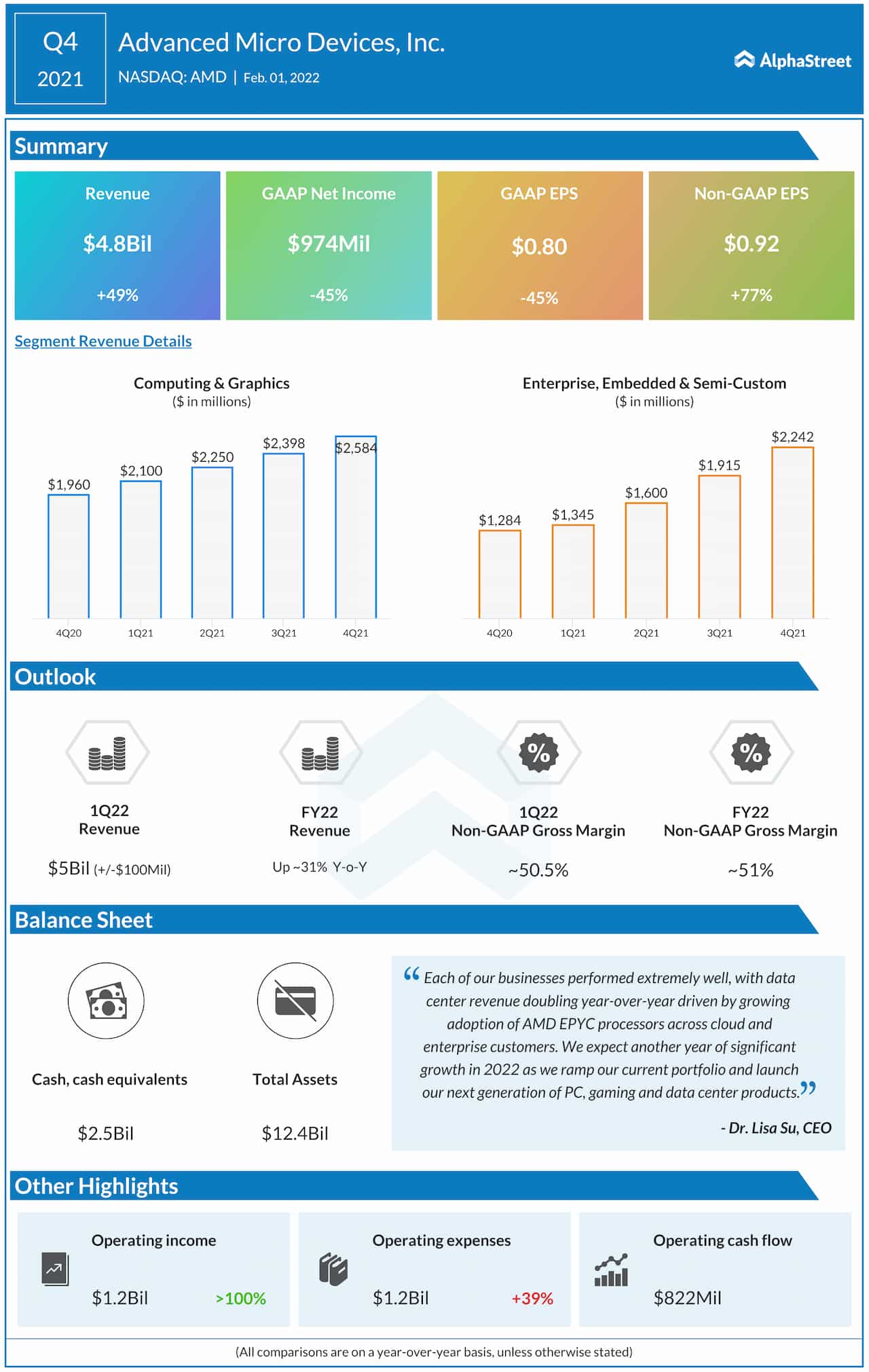 In the fourth quarter of 2021, AMD’s adjusted earnings jumped 77% to $0.92 per share on a year-over-year basis. Driving the growth, revenues moved up 49% annually to $4.8 billion, with strong contributions from the main operating segments. The results also exceeded analysts’ estimates. The management expects the uptrend would continue this year, supported by the portfolio ramp-up and launch of next-generation semiconductor products.

“Demand for our products is very strong, and we look forward to another year of significant growth and share gain as we ramp our current products and launch our next wave of Zen 4 CPUs and RDNA 3 GPUs. We have also made significant investments to secure the capacity needed to support our growth in 2022 and beyond. Looking out over the long term, we are confident in our ability to continue growing significantly faster than the market based on our expanded roadmap investments and the deep relationships we have established with the broad set of customers.”

Intel, AMD’s main rival, was also hurt by the tech selloff that sent the chip giant’s shares to a multi-year low. In the most recent quarter, Intel’s earnings dropped in double-digits despite a modest increase in revenues, adding to the weak investor sentiment. The core business, Client Computing Group, was down 7%.

Meanwhile, continuing macroeconomic headwinds and weakness in certain segments like the volatile PC market pose a growth risk to semiconductor firms, including AMD.

The company’s stock declined steadily in recent months and languished near the $100-mark last week. But it regained momentum since then and traded higher on Tuesday afternoon.