As American Airlines (AAL) prepares to report second quarter results, prospects of a pleasing outcome are grim. Two weeks back, the Texas-based airline company had lowered its outlook for unit revenue growth and capacity due to domestic yields that came below the expected levels. American Airlines also increased its fuel price estimation for the second quarter, triggering a selloff across all major airline stocks including United Holdings Group (UAL) and Delta Air Lines (DAL).

However, the trimmed outlook was expected given the headwinds the world’s largest airline company is currently facing. Not doing so would have resulted in a rude shock to investors when the company reports earnings on Thursday. Now that the investors are prepared for the worst, the repercussions of even a poor quarterly performance will possibly be pegged.

An escalating geopolitical and macroeconomic crisis is adding to the risks associated with American Airlines, thanks to its vast global presence and focus on business travelers. The trade war threat had earlier this month prompted Deutsche Bank to cut the rating on the stock from BUY to HOLD and slash price target from $60 to $43. Look out for any management comments on changes in capex deployment plans in view of the trade war.

For the past three years, American Airlines’ annual profits and pre-tax margins have seen a downward trend, which is likely to continue through this year as well. Over the past few months, the company has been aggressively plugging underperforming routes to focus better on markets that rake in profits.

Services in the Chicago-Beijing route and several routes to Brazil have been canceled as part of this move. While this may help in slowing the profit bleed, it may not be adequate to totally reverse the trend. The management is likely to reveal more plans to improve pre-tax margins during Thursday’s conference call.

If these are not enough troubles to American, JetBlue (JBLU) has been increasingly becoming a threat in terms of taking away passengers and investors. Thanks to better passenger comforts and a more reasonable stock, more customers are flocking to this low-cost airliner.

American Airlines is expected to report second quarter EPS of about $1.59 on revenue of $11.67 billion. The stock has lost over a quarter of its value since the beginning of this year. 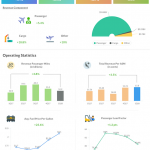