United Airlines parent United Continental Holdings (UAL) reported its quarterly results after the closing bell. Thanks to strong travel demand, the company’s second-quarter results came in better-than-expected beating analyst estimates on both revenue and earnings front. Revenue jumped 7.7% to $10.78 billion whereas earnings increased 17% to $3.23 per share amidst rising fuel costs, which continues to be a dampener for the aviation industry. Shares of United increased 3% during extended hours of trading.

The company’s profit slipped 17% to $684 million primarily due to the increase in fuel costs. United’s fuel costs shot up 43% touching $2.39 billion compared to $1.7 billion incurred last year. It’s worth noting last week Delta also reported a 40% jump in aviation fuel costs, which impacted its margins. Generally, the second quarter is a seasonally strong quarter for United and its peers due to strong travel demand. 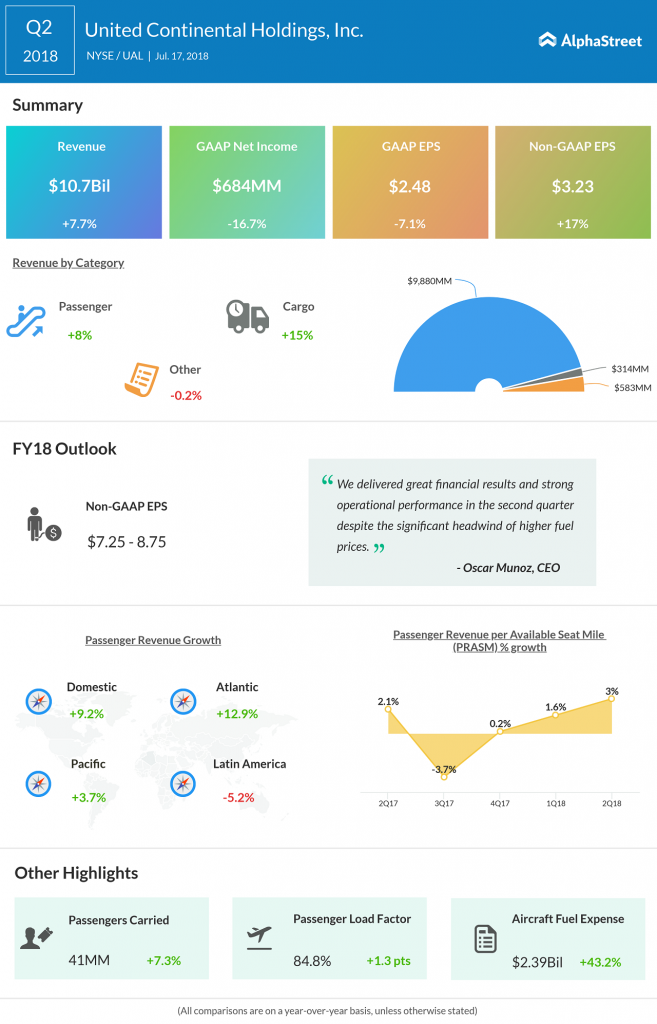 Load factor improved to 84.8% compared to 83.5% reported last year. Unit revenues, a key metric tracked by analysts, rose 3% over the prior year, while cost per available seat mile (CASM) rose 7.1% in the quarter due to the surge in fuel costs.

On the capacity expansion front, United modestly trimmed its 2018 forecast in line with what Delta announced last week. The airline now expects an increase of 4.5% to 5% compared to 4% to 6% announced in March. Reduction in capacity outlook would be beneficial for all airlines as it would result in improved margins.

The company didn’t provide any earnings guidance for the third quarter. It expects unit revenues to increase 4% to 6%, while the capacity addition to come between 4.5% and 5.5%.

United announced on Tuesday it placed orders for 25 Embraer E-175 and four Boeing 787-9 aircraft, which are expected to be received in 2019 and 2020 respectively. This would augur well for the firm to expand its regional footprint and revamp its existing fleet.

In May, CFO Andrew Levy decided to leave the company after having a two-year stint. United has appointed Gerry Laderman as the acting CFO and is yet to find a replacement for that position. More details from the management can be expected on Wednesday where United has scheduled to conduct a conference call at 10:30 AM ET.

Last week, United’s rival Delta Airlines (DAL) reported better-than-expected second quarter results. To offset the fuel cost impact, the airline is planning to trim its capacity and raise fares. American Airlines (AAL) is scheduled to report its second-quarter earnings on July 27. Shares of United Continental has increased 8% this year but has decreased nearly 9% over the past 12 months.