Adjusted earnings, excluding special items, increased to $1.77 per share in the second quarter from $1.59 per share a year earlier, surpassing expectations. Reported earnings were $1 billion or $1.47 per share, down from $1.19 billion or $1.62 per share registered in the year-ago quarter. 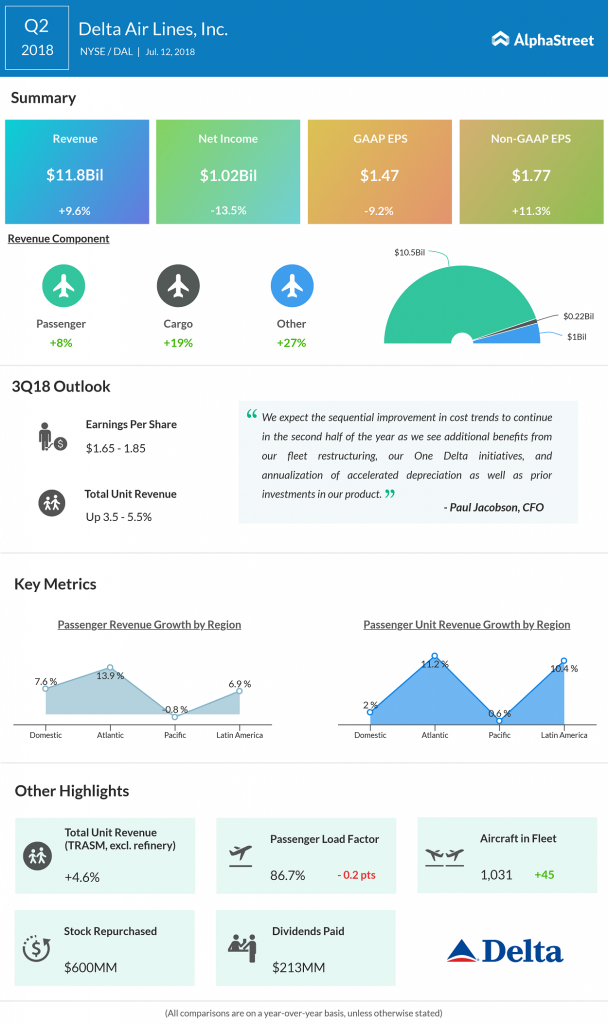 Fuel purchase costs surged 40% to $2.36 billion and the average price per gallon rose to $2.19, dragging margins significantly. The impact of higher fuel prices was partially offset by the record revenues.

Revenues climbed 9.6% annually to $11.78 billion, with all regions except Latin America registering growth. Passenger revenues were higher by 8% compared to last year, while cargo revenues surged nearly 20%. Total adjusted revenues were $11.56 billion, up 8.6%.

“With strong revenue momentum, an improving cost trajectory, and a reduction of 50-100 bps of underperforming capacity from our fall schedule, we have positioned Delta to return to margin expansion by year end,” said Delta CEO Ed Bastian.

In the second quarter, the impact of higher fuel prices on profitability was partially offset by record-high revenues

During the June quarter, the company returned $813 million to shareholders and declared a 15% increase in its dividend.

For fiscal 2018, Delta expects earnings in the range of $5.35 per share to $5.70 per share, which includes a projected $2-billion rise in the fuel bill. The company is looking for a 3.5- 5.5% revenue growth in the third quarter, when operations are expected to benefit from its commercial initiatives.

Earlier this week, Delta had downgraded its outlook of adjusted earnings for the June-quarter to reflect the near-50% increase in fuel prices.

Among Delta’s competitors, United Continental (UAL) and American Airlines (AAL) are scheduled to release results for their second quarter on July 17 and July 27, respectively.

Shares of Delta lost more than 17% since January, when it reached an all-time high. The stock gained nearly 2% in premarket trading Thursday, after closing the last session lower.