However, the stock slipped slightly in after-market trade following the announcement — possibly on a downgrade in GAAP earnings outlook for fiscal 2019 by the company, along with the effect of Electro-Optics impairment on the currently reported quarter.

The ballistics parent incurred a net loss of $5.73 million or 10 cents in loss per diluted share, compared to the year-ago profit of $11.4 million or $0.21 per share. 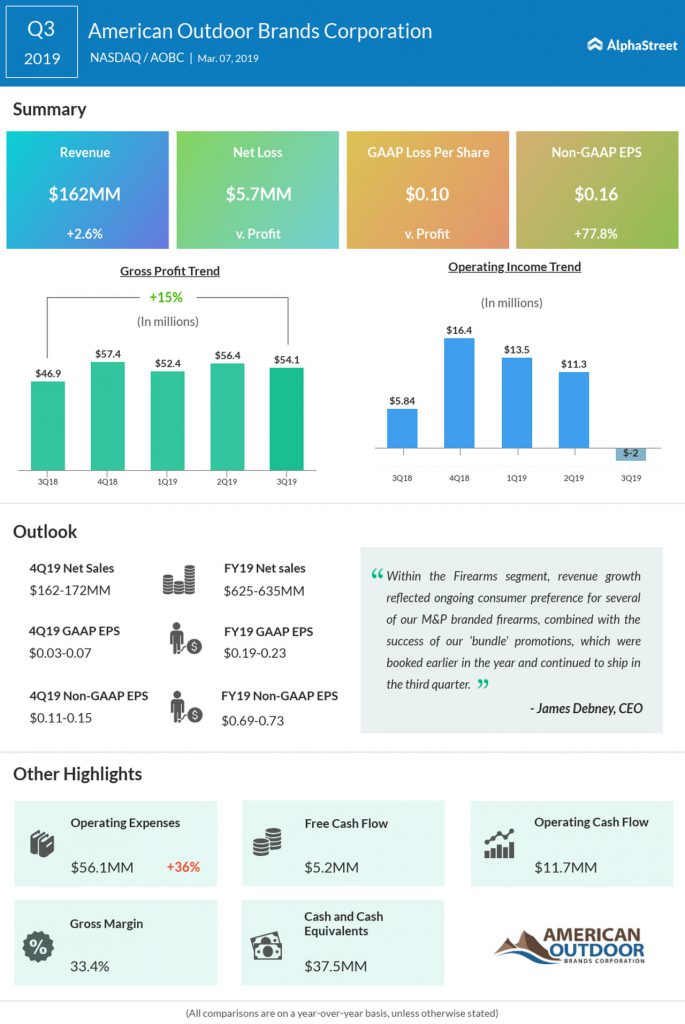 According to AOBC, “Based upon long-term sales forecasts for its Electro-Optics operating unit, the company has decided to restructure and combine that business with its Outdoor Products & Accessories operating unit in order to drive efficiencies and increase operating performance.”

“As a result of those forecasts, the company conducted an evaluation to assess the fair value of the Electro-Optics operating unit and, as a result, recorded a $10.4 million partial impairment of the goodwill in that operating unit during the third quarter,” read a company statement.

“During the quarter, we had $25.0 million outstanding on our $350 million line of credit, which is expandable to $500 million,” the CFO added.

For the fiscal fourth-quarter, the Smith & Wesson maker is looking at net sales of $162-172 million, generating an expected GAAP diluted income between 3 cents and 7 cents a share.

On a non-GAAP basis, AOBC is expected to earn $0.11-0.15 per diluted share in the upcoming quarter.

“The ramp up of initial operations at our new Logistics & Customer Services facility in Missouri is well underway and on track. This 633,000 square foot, state-of-the-art facility will serve as our centralized logistics, warehousing, and distribution operation for all of our products, facilitating our growth, enhancing our efficiencies, and allowing us to better serve customers across our entire organization,” CEO James Debney added.