Baidu (NASDAQ: BIDU) stock rose above 9% after the bell backed by better-than-expected second quarter results. After the disappointing Q1 results in May, the stock is down 33%. The search engine giant has been multiple headwinds this year resulting in the share price dwindling more than 50% in the last 12 months. Ahead of the Q2 earnings, the stock price was up nearly 8% at the close of today’s trading session.

As expected the headline numbers remained muted due to the Chinese economy slowdown, the ongoing trade war and rising competition from its peers Tencent and ByteDance. Revenue saw a modest growth of 1% to $3.83 billion while adjusted EPS came in at $1.47 per share. The company surpassed estimates on both the top and bottom line metrics.

For the Q2 period, the company earlier guided revenues of $3.74-3.96 billion compared to $3.66 billion expected by the street. It didn’t provided any earnings guidance, but analysts were anticipating adjusted earnings of 87 cents per share. 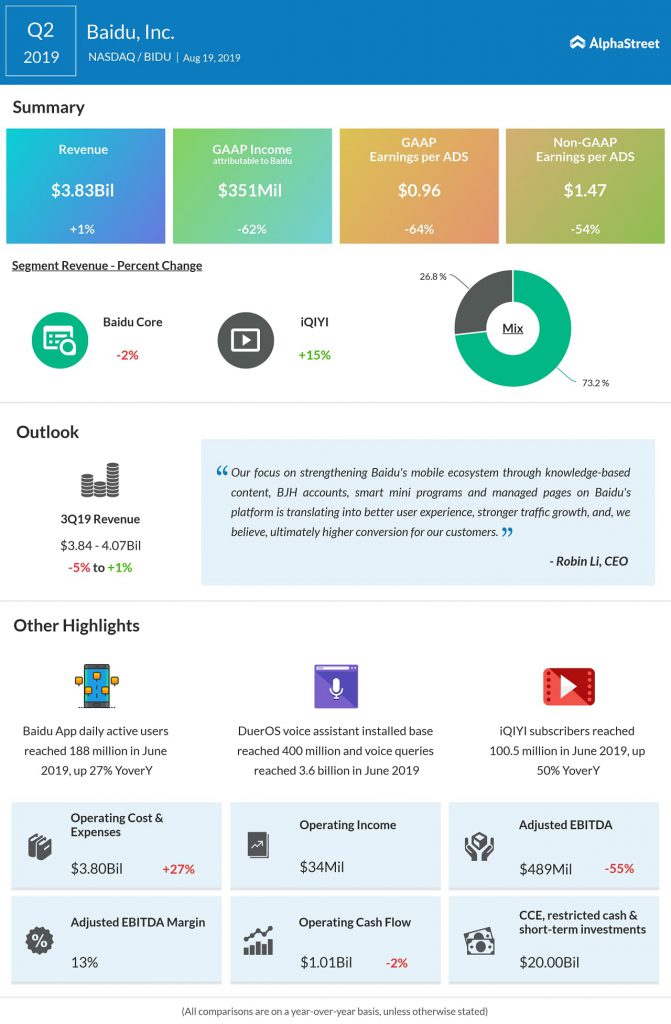 Ad sales bring in lion’s share to the top line. However, the headwinds continue to weigh down on the Baidu’s Core marketing services performance. Revenue from the online marketing services was down 2% to $2.85 billion. The company continued to experience muted growth from gaming, healthcare and financial services due to increased regulation from the Chinese government.

Other revenues, which include contribution mostly from the video-streaming platform iQIYI gave a fillip to the Baidu’s earnings. Other revenues surged 44% over last year due to stellar growth across iQIYI‘s key performing metrics. At June end, iQIYI subscribers rose 50% to 100.5 million subscribers over prior year. The 38% increase in membership services was dragged by 16% drop in online ad revenues.

Content costs rose 12% due to rise in spending for content on the iQIYI platform which was offset by reduced expenses on the BJH front. Traffic acquisition costs (TAC) surged 27% over prior year, which is better than 41% growth reported last quarter. The decrease in TAC sequentially shows the company’s ability to retain customers without spending much money.

Baidu’s selling, general and administrative and R&D expenses grew double-digits as the company continues to invest in marketing and research efforts to improve the product platform offerings.

At the end of June, daily active users (DAU) for Baidu App increased 27% to 188 million while monthly active users (MAU) for Smart Mini Program touched 270 million, an increase of 49% over last quarter. The installed base for voice assistant DuerOS eclipsed 400 million mark, jump of 4.5x over prior year. Monthly voice queries by users also increase 7.5x over last year.

The search engine giant is guiding revenues of $3.84-4.07 billion compared to $3.97 billion expected by the street. The company hasn’t provided earnings guidance, but analysts are expecting non-GAAP earnings of $1.19 per share.