Shares of the meal-kit provider Blue Apron (NYSE: APRN) rose 4% in the pre-market hours after the company’s fourth-quarter results came in line with analyst estimates. It also continued to benefit from the ongoing cost control measures and improving efficiencies across the board.

Blue Apron announced a few strategic announcements which are expected to augur well for the firm. It is planning for a scheduled transformation of major production volume from its Arlington, Texas fulfillment center to New Jersey-based Linden facility. It’s worth noting that Linden is the largest facility for the firm and most importantly the efficient facility.

The shift in production, which is effective April 1, 2019, comes with $1 million restructuring expenses which would be recorded in the first half of 2019. The production transfer is expected to save $7 million annually starting from the third quarter of 2019. 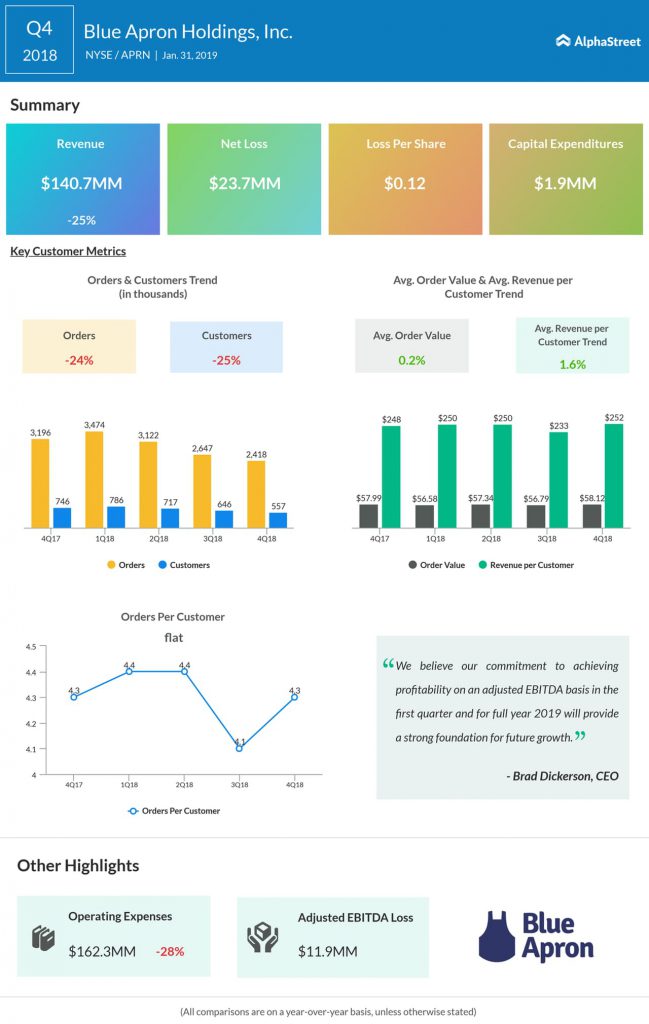 Earlier this month, Blue Apron told investors that it would return to profitability on an adjusted EBITDA basis in Q1 2019 and for fiscal 2019. It also added that the recently announced WW deal is witnessing good customer traction. After the news broke out, investors responded positively with the stock soared above 44% when the markets closed on January 15.

Blue Apron also spilled the beans about a new product launch which would be catering to both online and brick-and-mortar clients. The company is expected to reveal more details about its partner and new launch shortly. Investors would be keeping a close tab on this and will be interested to know how it would improve sales and margins.

Sales for the fourth quarter slipped 25% to $140.7 million due to the ongoing strategic transformation and seasonality. However, the top line numbers surpassed analysts’ estimates who were expecting revenue of $137.45 million.

On the earnings front, the company was able to narrow its loss to $0.12 compared to $0.20 loss reported last year. The Q4 loss numbers were better than the $0.17 loss expected by the street.

On an adjusted basis, EBITDA saw a 60% improvement over last year due to the cost control measures and improving efficiencies. The company reported $7.8 million loss in Q4 which also improved over last reported quarter numbers.

Blue Apron has been keeping a close eye on trimming down expenses. Marketing expenses reduced 19% to $20.3 million as the company intends to focus on bringing in more loyal and high-value customers and improve customer retention from its direct-to-consumer platform.

Spending on the technology, general and administrative front decreased 15% and other operating expenses came in at $2.2 million, mainly attributed to the layoffs announced in November 2018. However, the restructuring expenses are much lesser than the $6.8 million recorded last year due to the employee restructuring efforts done in the latter part of 2017.

Blue Apron continues to struggle on bringing in more customers to its platform. At the end of Q4, it had 557,000 customers compared to 746,000 last year. On a sequential basis, the company lost 89,000 customers, which definitely is a worrying trend for investors.

With decreased spending on marketing and higher costs for acquiring new customers, Blue Apron is focusing on high-value customers and improving retention on its direct-to-consumer platform.

You may also like: What’s cooking in the US meal-kits market?

Average order value rose marginally to $58.12 compared to $57.99 reported last year. The order value was up $1.33 over Q3 numbers, which is an encouraging trend. The number of orders placed by a customer was flat over last year. However, it improved marginally over Q3 metrics.

Average revenue per customer is the most important metric watched by shareholders to gauge the performance of the firm. For the fourth quarter, the company’s revenues from a customer stood at $252, up modestly by 1.6% over the prior year period. When compared to last quarter, the metric saw a healthy growth of 8.2%.

In Q3, the company said that due to increasing customer acquisition costs, it would take more time to recoup from its customers. With the new strategy to focus on niche customers, the average revenue per customer would continue to improve in fiscal 2019. 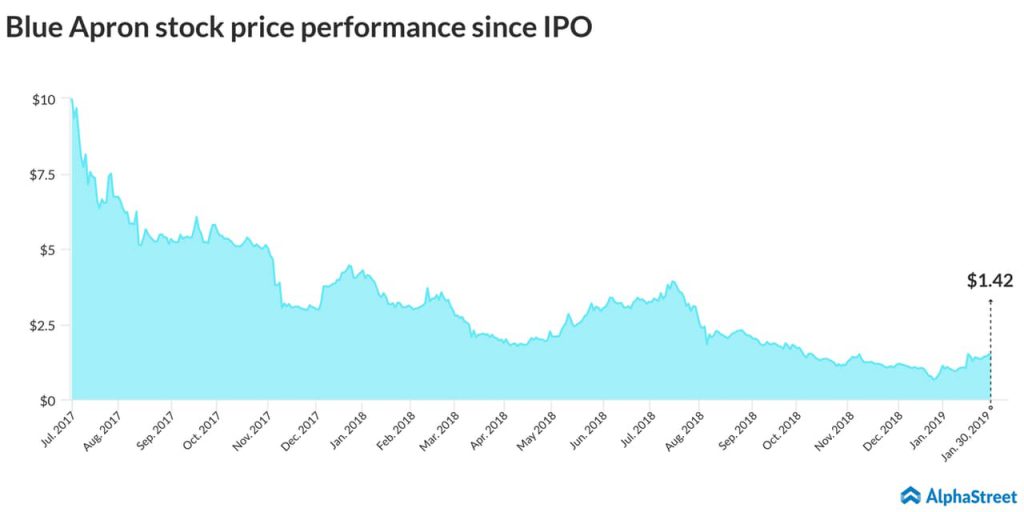 In order to expand its reach, Blue Apron entered into partnerships last year with the likes of Costco (COST), Grubhub (GRUB) and Walmart’s Jet. Last December, it also signed a deal with WW (Weight Watchers) to deliver meal kits for people who follow Freestyle program. Blue Apron has commented that it is witnessing better-than-expected demand from WW platform, which would improve margins.

The partnerships would help the company to expand its meal-kit deliveries to target new customers without burning more money. In one way, this would help Blue Apron to tap into on-demand customers who aren’t willing to enroll for subscriptions. This also is beneficial to improve margins because the partners will be pushing the meal-kits as they are paid based on the number of meal-kits ordered by customers through their platform.

But investors are still wary about this strategy in the long-term as it would not be sustainable for Blue Apron to depend solely on its partners for growth. This strategy can be easily followed by its rivals like Plated, HelloFresh, Home Chef, Gobble etc. In addition, Amazon (AMZN) through its Whole Foods deal has also started delivering meal kits.

Blue Apron is the first meal-kit firm to list on the bourses in June 2017. The company started to trade at $10 with an enterprise valuation of $2 billion. Fast forward to January 2019, the shares are trading at $1.36 levels with a market cap of $265 million. This has raised many questions about the meal-kit providers’ business model and its sustainability.

It’s not only for Blue Apron, but the entire meal-kits industry has been grappling with cut-throat competition, inefficient logistics, higher unit costs, and increasing customer acquisition costs. In addition, with lower customer retention rates, it’s getting tougher for firms like Blue Apron and its peers to stay afloat.

CEO Brad Dickerson and his team have an uphill task at hand to prove that naysayers are wrong and give confidence to shareholders about the future of the company.