Profit jumped 26% to $2.2 billion primarily due to improved airplane deliveries to its customers and savings due to the recent income tax reforms. Earnings climbed 30% to $3.73 per share and core earnings per share soared 34% to $3.33. The latest quarter results also reflected a charge related to the previously announced Spirit litigation outcome.

Revenue increased 5% to $24.3 billion from the prior-year period. The aircraft maker saw solid growth across all its segments during the quarter. Backlogs improved by $2 billion to $488 billion at the end of the quarter and included net orders of $27 billion.

Research and development expenses are still anticipated to be about $3.7 billion and capital expenditures are predicted to be around $2.2 billion for the full-year 2018. For the Defense, Space & Security segment, the company lifted revenue from outlook to $22 billion – $23 billion from $21.5 billion – $22.5 billion, while lowering its operating margin estimate to 10-10.5% from about 11%.

For the second quarter, Boeing’s deliveries rose 6% primarily aided by strong demand for its single-aisle 737 airplanes. Over the next two decades, single-aisle planes, which are in high demand globally, are expected to garner two-thirds of the global demand.

In early July, media reports revealed that Boeing received a total of 460 new orders in the first six months of 2018, more than double the number of orders booked by Airbus during the same period. Also, Boeing is intending to lift the monthly output of 737s by 10% to 52 units in the second half of 2018 and further to 57 units in 2019.

Investors remained concerned on the increase in costs associated with the Defense, Space & Security segment during the full year 2018, which dragged the operating margin outlook down despite an increase in revenue estimate.

Shares of the aerospace giant fell 3.03% in the pre-market trading. 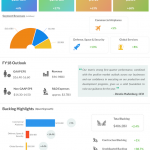