Earnings preview: Be ready for another strong performance from Broadcom

Semiconductor firm Broadcom (AVGO) is scheduled to report its third-quarter results Thursday after the closing bell. The company is widely expected to post earnings of $4.82 per share on revenues of $5.06 billion for the quarter, representing an increase from the corresponding year-ago numbers.

The conditions that favored the better than expected results in the trailing four quarters improved in the most recent quarter, signaling yet another beat.  Typically, the company’s market value witnesses wide fluctuations after earnings reports, and a clearer picture emerges once the management discloses future plans in the conference call.

On the revenue front, the company stands to benefit most from the thriving wireless communications segment – especially considering the recent expansion of product portfolio with a focus on 5G technology and Internet of Things – despite the seasonal factors that could impact performance. The other key growth drivers are cloud and data center.

Market watchers also see above-trend growth in Enterprise Storage, which accounts for about a quarter of the total revenues, supported by Brocade Fibre Channel that was added to the Broadcom fold last year.

On the revenue front, the company stands to benefit the most from the thriving wireless communications segment

In the second quarter, revenues of the California-based company jumped 20%, driving its profit well past expectations. The top-line particularly benefitted from an uptick in the wireless and industrial segments.

In a strategic shift in its business model, Broadcom recently ventured into the software realm by clinching a $19-billion merger deal with CA Technologies (CA). Having shifted its headquarters from Singapore to San Jose earlier this year, the company expects to close the high-value transaction in a hassle-free manner later this year.

Fellow chipmaker Qualcomm (QCOM) which recently made an unsuccessful bid to acquire Broadcom, reported a sharp increase in third-quarter earnings, helped by reduced costs and an impressive performance by the technology licensing segment. Earnings of Intel (INTC) surged 78% in the second quarter on the strength of the company’s data center business.

RELATED: Broadcom shifts base back to the US

Broadcom shares hit an all-time high in November of last year, continuing the steady ascent that started several years ago. The stock, however, lost momentum after reaching the peak and dropped about 17% since the beginning of the year. It closed Wednesday’s trading at $221.42, up 0.91%. 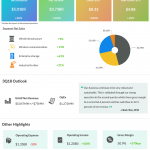