Canadian Solar (CSIQ) reported its first-quarter earnings early on Thursday, before the opening bell. The bottom line slipped to a loss from a profit last year, which had a higher revenue contribution from project sales and higher solar module average selling price. The bottom line was narrower than the analysts’ expectations while the top line exceeded consensus estimates. However, the company guided second-quarter revenue above Street’s view.

Net loss attributable to the company was $17.2 million or $0.29 per share, compared to a profit of $43.38 million or $0.72 per share in the previous year quarter. The results were impacted by higher costs and expenses. 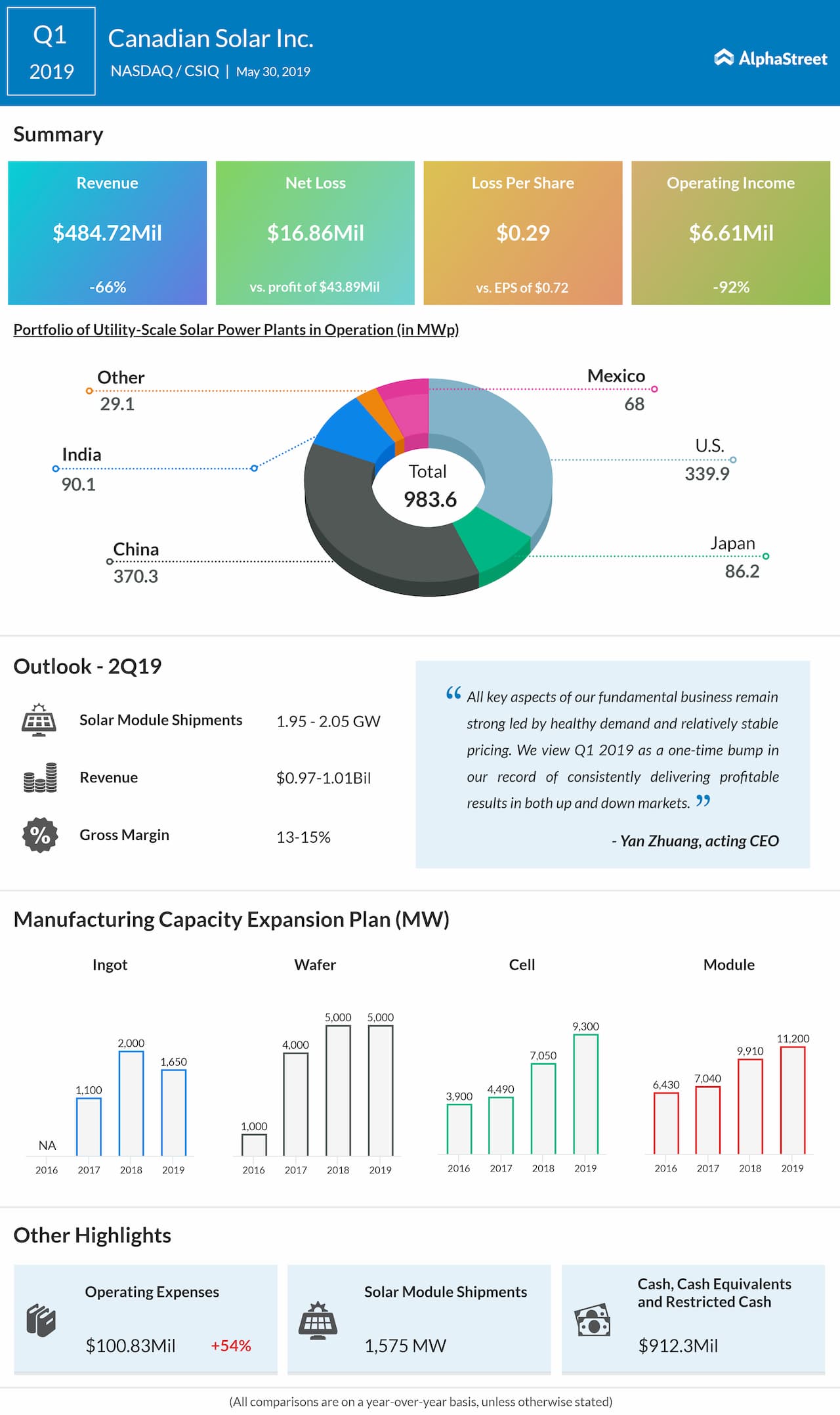 The overall profitability was impacted by a foreign exchange loss due to the appreciation of the RMB against the US dollar, lost manufacturing days and a lower production volume due to its ERP system upgrade and the Chinese New Year holiday, as well as anticipated lower sales of solar power projects.

The company said it reasonably expected a healthy pause in the first quarter of 2019 due to the acceleration of certain high-profit project sales from 2019 into 2018, the appreciation of the RMB, lost manufacturing days related to its ERP system upgrade and the impact of Chinese New Year on production and sales volumes.

Canadian Solar is encouraged by the healthy demand levels that it is seeing in its key markets, stability in module average selling prices and expected higher utilization of its capacity. The company’s late-stage, utility-scale solar power project pipeline, including those under construction, increased to about 3.4 GWp, as of April 30, 2019. The sale of the majority of these projects remains on track for 2020 or later.

The company agreed in April to sell 80% interest in its 482.6 MWp late-stage project portfolio in Brazil and expects to close this transaction and recognizes the revenue after the second quarter of 2019. In addition, in May, Canadian Solar closed the sale of the 134 MWp Mustang project in the US and the 68 MWp Aguascalientes project in Mexico.

Shares of Canadian Solar ended Wednesday’s regular session down 0.45% at $17.69 on the Nasdaq. Following the earnings release, the stock inched up over 3% in the pre-market session.