“2018 was a record year for us as our revenue, total module shipments and gross margin all exceeded our expectations for both the fourth quarter and full year 2018,” said CEO Dr. Shawn Qu. 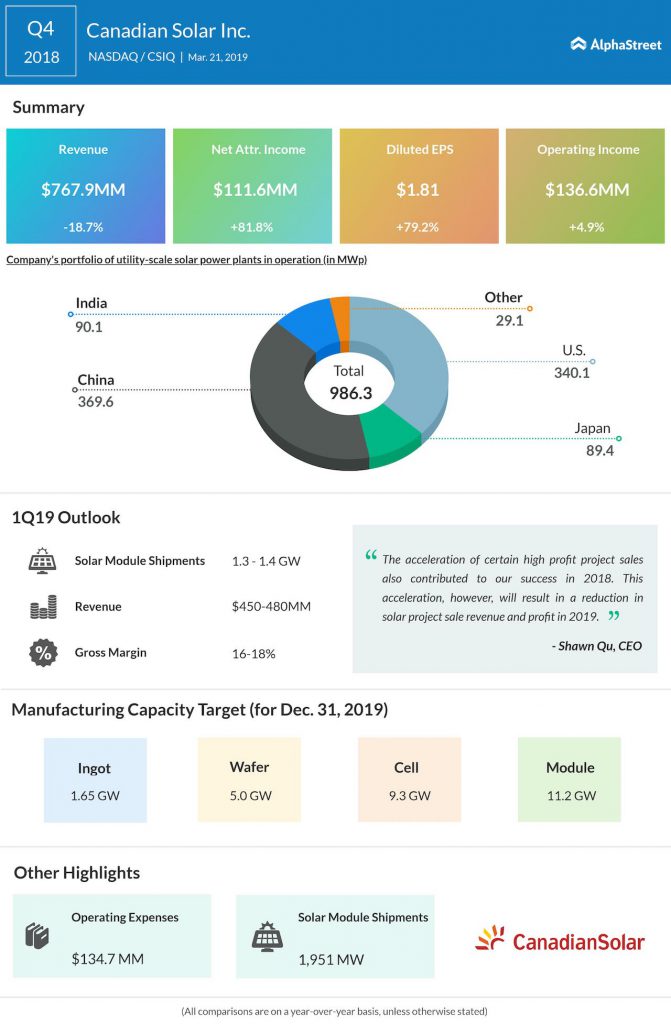 Canadian Solar had $941.0 million of cash, cash equivalents and restricted cash as of December 31, 2018.

“The Company expects the net profit for the first quarter of 2019 to be low or negative, primarily due to typical lower production and sales volume during the Chinese New Year holiday, IT upgrade, a lower module ASP, decreased sales of solar power projects compared to previous quarters, and an expected foreign exchange loss due to the appreciation of the Chinese RMB against the U.S. dollar,” it stated in a statement.

“”We had an exceptional year in 2018, with close to 140% growth of net profit from the 2017 level… ….the acceleration of certain high profit project sales also contributed to our success in 2018,” said the CEO, “This acceleration, however, will result in a reduction in solar project sale revenue and profit in 2019.  And while we have a strong 2.9 GWp late-stage solar project pipeline, due to the typical project development cycle, we expect to realize sales for the majority of these late-stage projects in 2020 or later.”

For fiscal 2019, Canadian Solar now expects total module shipments amounting to 7.4-7.8 GW, with the total expected full-year revenue to be in the range of $3.5 billion to $3.8 billion. This guidance reflects the impact of an expected lower module ASP and lower revenue from solar project sales.

However, despite expecting profit in subsequent quarters to recover from that expected in the first quarter of 2019 along with module and project sales jump, Canadian Solar now sees its net profit for 2019 to be lower than 2018.