Chesapeake Energy also announced that that it achieved year-end 2018 net production exit rate of almost 38,500 boe per day at Powder River Basin. It was about 47% oil.

Chesapeake CEO Doug Lawler weighed in, “In 2018, asset divestitures generated more than $2 billion in net proceeds which facilitated the retirement of our term loan and senior secured second lien debt. Total debt was reduced by approximately $1.8 billion from year-end 2017.”

“Importantly, the divested daily oil volumes associated with the Utica sale, which represented 10% of our third quarter oil production, were replaced in the last two months of the year through our legacy South Texas and emerging Powder River Basin oil engines,” he added.

“Looking forward to 2019, we are confident in our ability to drive further competitive performance through the quality of our investments and our capital and operating discipline,” said CEO Lawler.

“We plan to reduce our 2019 capital expenditures by lowering our rig count by approximately 20 percent, expecting to average 14 rigs versus our current rig count of 18. Further, we expect our capital efficiency to improve in 2019 as total net capital per rig line is projected to decrease by 15 to 20 percent compared to 2018. The improvement in our capital efficiency, along with our focus on our high-margin oil investments, should result in higher operating cash flow and stronger margins in 2019 compared to 2018,” he added.

In the last reported quarter, Chesapeake pleased shareholders with upbeat results. Then, the explorer reported average production of about 537,000 boe per day and average oil production of 89,000 bbls of oil per day. 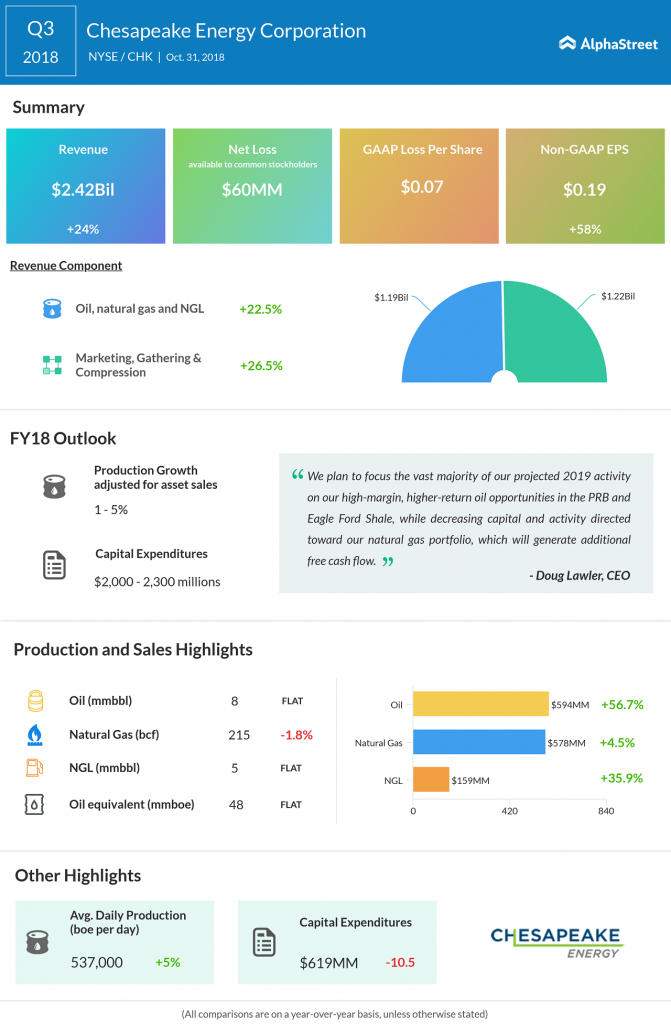 Then in October, Chesapeake also announced its plan to acquire WildHorse Resource Development Corporation (WRD) for about $3.97 billion. The deal was then projected to deliver substantial cost savings, and expected to close in the first half of 2019. “We look forward to consummating the merger with WildHorse Resources and further strengthening our portfolio and competitiveness with another strong oil growth asset. We plan to provide detailed capital guidance for the combined company later in the 2019 first quarter, but at present we anticipate operating four rigs on the WildHorse acreage in 2019,” said CEO  Doug Lawler regarding the deal.