Chevron vs. ExxonMobil: Which energy stock is a better buy?

After staying resilient to the market downturn, the companies' stocks hit record highs this month

When the coronavirus crisis played havoc with stock markets, the energy sector was also affected but top players like ExxonMobil Corporation (NYSE: XOM) and Chevron Corporation (NYSE: CVX) have recovered from the demand slump experienced at the peak of the pandemic and have shifted to growth mode. Also, their stocks reached record highs in recent weeks, at a time when the business world is facing fresh challenges like macroeconomic and geopolitical uncertainties. Of late, energy companies have been riding the steady rise in oil prices.

Choosing between the stocks of ExxonMobil and Chevron is very difficult because both are performing extremely well. XOM has gained about 75% since last year, while CVX moved up 57% during that period. Both stocks have what it takes to create consistent shareholder value.

From an investment perspective, the energy stocks offer a great buying opportunity, with the only concern being their valuation which is higher compared to the industry. The stocks have been favorites among income investors for a long time, thanks to the impressive track record of the firms in raising dividends and maintaining strong yields.

ExxonMobil is bigger in terms of scale — having a strong presence in both the Upstream and Downstream segments. It has a larger market cap also, but the stock value is lower compared to that of Chevron. While the higher share price makes CVX more susceptible to market uncertainties, the company’s balance sheet is quite healthy, marked by strong cash flows and low debt.

The primary factor that makes Chevron a winner is its strong portfolio of projects and stable production growth. The management expects upstream production to grow at a compound annual rate of more than 3% through 2026 and looks to reduce capital and exploratory expenses significantly. It sees higher returns and free cash flow in the strategically important Permian basin, where net production is estimated to grow steadily over the next decade and stabilize thereafter. While ExxonMobil is equally bullish on its long-term production goals, it is yet to develop its Permian assets to full potential. 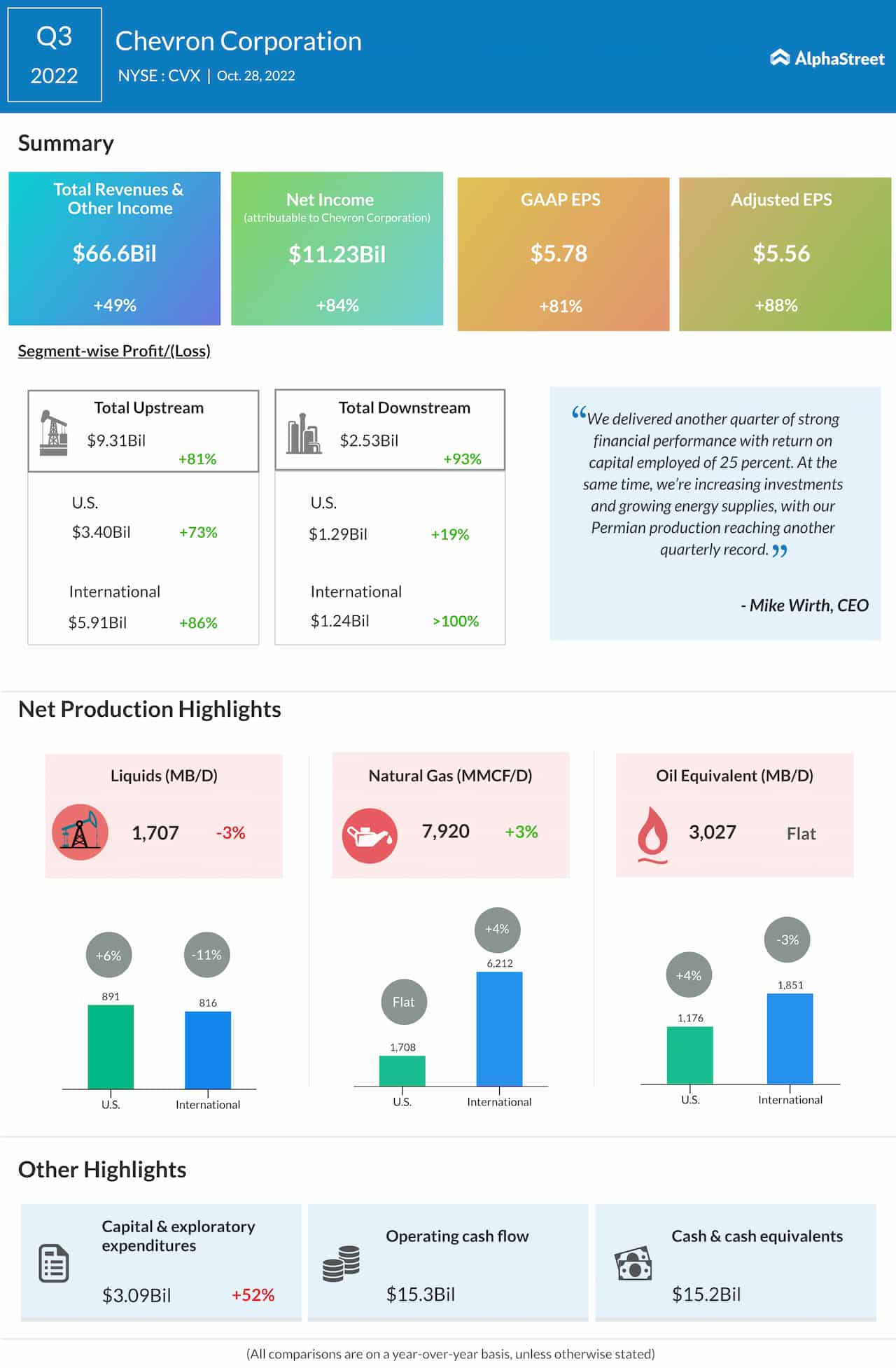 “Our investments in our traditional new energy growing both our guidance on upstream production growth is 3% compounded. We’re now the second largest bio-renewable diesel producer in the country with our REGI acquisition. And when we generate cash in excess of that, it first goes to the balance sheet. So, we’ve been very clear that our stated net debt ratio is between 20% to 25%,” said Chevron’s CFO Pierre Breber during a recent interaction with analysts.

Interestingly, quarterly earnings of the energy giants beat the Street view more regularly in the last couple of years than they have done in the past. In the most recent quarter, ExxonMobil’s adjusted profit more than doubled to $4.45 per share, reflecting a 52% growth in revenues to $112 billion. The company owes its strong revenue performance in recent quarters to continued investments in the business, while the bottom line benefitted from aggressive cost control and higher margins from the chemical and petroleum products.

Last month, Chevron reported broad-based growth in its upstream and downstream businesses across all geographical segments. That drove up total revenues to $66.6 billion, which in turn resulted in an 88% surge in adjusted earnings to $5.56 per share. Production at the Permian basin reached a record high even as the management continued to invest in the business, a strategy that got more prominence post-COVID.

After starting the week on a low note, shares of ExxonMobil and Chevron gathered steam, and they traded higher on Tuesday afternoon.