There is hardly anything that the world’s biggest soft drink makers have not tried to outsmart each other in the ever-raging Cola wars. Of late, there has been a noticeable shift from non-carbonated drinks towards healthier versions.

Coca-Cola this week acquired a minority stake in BodyArmor in a deal that could eventually lead to the soda giant taking full ownership of the coconut water-based sports drink in future. While the exact terms of the transaction are not yet known, it is believed the sale consideration will depend on BodyArmor’s overall performance for a specific period.

The announcement comes after several weeks of speculation that the brand will be changing hands soon, and Coca-Cola was considered the most likely bidder. Currently, there is speculation that the recently merged Keurig Dr. Pepper (KDP) will also sell the 15% stake it owns in BodyArmor.

The deal is viewed as an aggressive move by Coca-Cola to take on PepsiCo’s (PEP) popular health drink Gatorade, which enjoys a higher market share compared to Powerade, owned by the former. The company intends to position BodyArmor – a big hit so far among the youth and athletes – as a premium product. While operating as an independent entity under co-founder Mike Repole and his team, BodyArmor will make use of Coca-Cola’s massive bottling plants and distribution network.

When launched by the owners of sports drink brands VitaminWater and SmartWater a few years ago, it was claimed that BodyArmor contained coconut water and additional electrolytes compared to traditional health drinks. The other elements that make it a healthier choice in the segment are low sodium content and the absence of artificial colors and corn syrup. Interestingly, both VitaminWater and SmartWater later joined the Coca-Cola family, to grow into multi-billion dollar brands.

Building on those factors and promotional campaigns featuring popular athletes, BodyArmor gained momentum over the years and nearly outsmarted its closest rivals in the most recent quarter, including Gatorade.

“BodyArmor competes in the expansive and fast-growing sports performance and premium hydration categories that are much larger than sports drinks. This is where the BodyArmor brand has been growing exponentially,” said Coca-Cola North America President Jim Dinkins.

Broadly maintaining the levels seen at the beginning of the year, Coca-Cola shares recovered from the recent slump on Tuesday and traded slightly higher in the early hours. 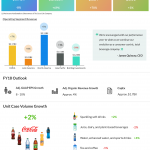