Revenues of Dell Technologies (DVMT) increased sharply in the second quarter amidst aggressive efforts to take the company public again. The PC maker also revised up its guidance for fiscal 2019 to reflect the overall improvement in operations.

The company reported adjusted net income of $1.35 billion for the three-month period, higher by 21% compared to last year. On an unadjusted basis, it posted a net loss of $499 million, marking an improvement from the $732-million loss recorded in the second quarter of 2018.

At $22.9 billion, revenues were up 18% compared to the prior-year quarter, with all business segments registering double-digit growth.

“Looking toward the second half of fiscal 2019, we’ll balance this growth by executing across strategic areas of the business, including driving additional share gains, continuing to generate strong cash flow and addressing our customers’ needs with our full range of capabilities,” said Dell CFO Tom Sweet.

After taking Dell private around five years ago, CEO Michael Dell is now actively seeking shareholder support to go public again, most probably without an IPO.

Shares of Dell reached a record high last year after making strong grains over recent months. The stock, which advanced more than 16% since the beginning of the year, closed the last trading session slightly lower. 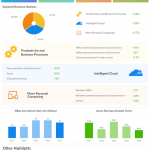