The past two months have been rough on Delta Air Lines (DAL) after shareholders punished the stock on dismal expectations regarding the coming quarterly results. Delta is expected to report its fourth-quarter results before the market opens on Tuesday.

In the first week of January 2019, Delta posted unimpressive revenue guidance for the quarter that sends the shares down. The market reaction reflected the muted growth prospects of the airline industry this year. Overall, the near-term outlook for the sector does not look very encouraging.

Delta narrowed its earnings outlook to $1.25-1.30 per share, slightly lower than analyst estimates. The carrier also touted that capacity inched 4% and traffic grew 3% during the three-month period.

Delta’s interim financial statement also hinted at fare revenue growth falling below expectations. This is also a cause for concern in the entire sector as suspicions of lower-than-expected performances by the major airlines soon cropped up, triggering a sell-off on Jan. 3.

This also hints that the aviation sector failed to benefit from the recent fall in gasoline prices.

For Delta, this problem is a bit more serious as shareholder sentiment has taken a beating — given the back-to-back outlook revision.

It was only in December that Delta had provided its initial target for fiscal 2019 at its annual investor day held in New York.

That time, Delta said it expected double-digit earnings growth at $6-7 per share for the year, helped by top-line growth of 4-6% and margin expansion with a 15% after-tax return on invested capital.

For the fourth quarter, the company expected total revenue growth of around 8% and total unit revenue excluding refinery sales growth of 3-5%. Earnings were then anticipated to be $1.10-1.30 per share.

Even though the carrier banked on benefits from its commercial initiatives, brand momentum, rising diverse revenue stream, and product mix, investors quickly send the shares down.

Even though Delta’s fuel expenses could be covered by strong revenue, shareholders are looking for more. And they are clearly disappointed. If Delta is looking to lift itself up, it’s quarterly results should include a better prospect of a solid performance in 2019. 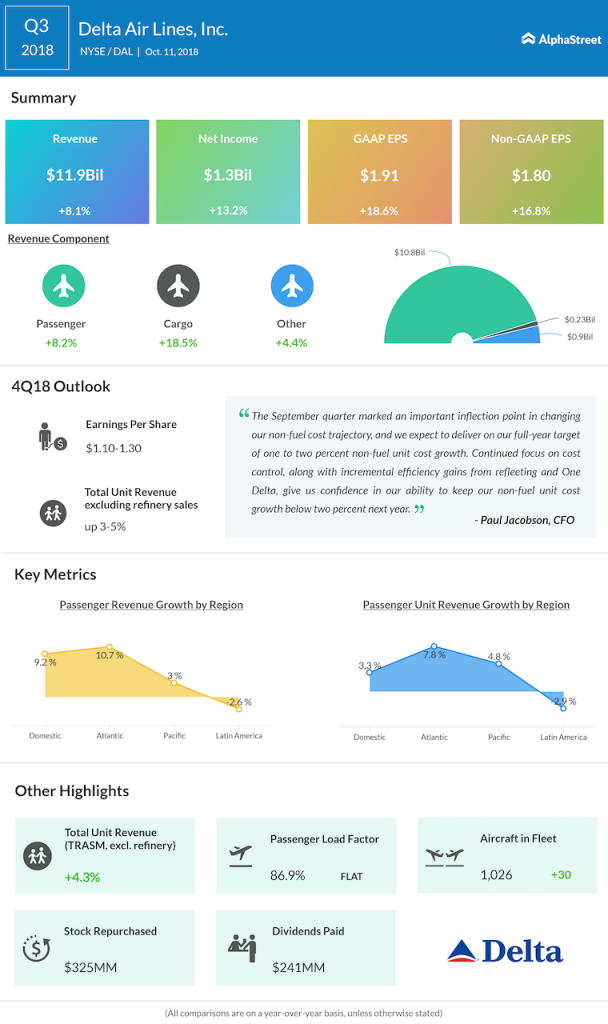 In the previously reported third quarter, Delta posted top-line growth of 8%, driven by higher premium product ticket revenues and double-digit percentage increases in cargo, loyalty and maintenance, repair and overhaul revenue. The revenue momentum along with tax reform benefits had helped push the bottom line up 13%.