Delta Air Lines (DAL) reported some impressive growth in both traffic and capacity for the month of April. However, the airline stock couldn’t hold the gain in the early hours of trading and was up slightly at $52.85 at 12 PM ET today.

The carrier’s consolidated traffic (as measured in revenue passenger miles or RPM) rose 3.7% compared with April 2017. Capacity, which is measured by available seat miles, rose 4%. The total systems load factor, also known as the passenger carrying capacity, fell marginally to 85.1% from 85.3% in the year-earlier period.

Nearly 15.9 million flew on the Atlanta-based airlines during April 2018, a 5.4% increase over the prior year. The carrier has made huge investments to enhance its customer-service. In fact, the carrier has enjoyed a steady growth for years, mainly due to increased travel demand within the U.S. 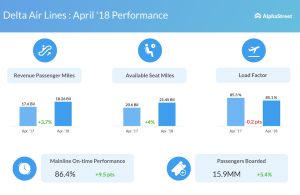 This rise in travel demand is expected to help the company post stronger revenues in the future. In 2017, the carrier witnessed a 4.05% jump in its revenue to over $41 billion. At the end of March, the carrier also announced a joint venture with Korean Air that will further contribute to the growing revenue. It is also working on selling more premium seats rather than gifting them as free upgrades to their frequent fliers.

With a market share of 17% in the U.S., Delta kick-started the year on a positive note but hit some turbulence on the fear of a possible U.S.-China trade war. Add to that Delta is not prone to the risk factors that affect the airline industry. Factors like increased fuel costs, and higher labor costs can dent the carrier’s financials. The pressure on major carriers is increasing, considering the dominance of the low-cost carriers.

In the recently ended first quarter, the company’s adjusted revenue jumped 8% to $9.8 billion. For the second quarter of 2018, Delta expects solid top-line growth and costs to improve, which will help mitigate the impact of higher fuel prices. EPS is expected to be about $1.80-2.00 for the June quarter.