Investors are ruthless if companies fail to fulfill their promises – a fact that especially applies to pharma companies. And Dermira learned it the hard way. Shares of the skin specialist tanked almost 60% on Monday after the company announced that its closely-watched experimental acne drug failed to meet the objectives of two phase 3 clinical trials, eliminating hopes raised by the positive results in the previous trial. 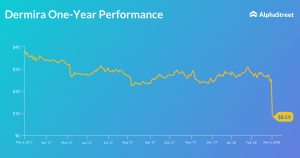 Initial success for the new acne drug olumacostat glasaretil, previously termed DRM01, sparked a lot of hype, lifting Dermira’s status higher. But on Monday, the company stunned Wall Street after it reported that its lead drug candidate has been a catastrophic failure.

Dermira stated that its new drug candidate failed to meet the objectives when compared to an inactive topical gel. Though the company is still reviewing the data, it has slashed its plan to continue with DRM01.

This sort of an overreaction from the stock market is expected as a similar trend was noticed when companies like Novan and Foamix Pharmaceuticals witnessed the same fate as that of Dermira. Both the companies had failed during the Phase 3 trials last year, sending the company’s stock spiraling.

This loss proves to be too costly for CEO Tom Wiggans and his team as the company had taken on debt for the first time last year when the acne trial showed some promising results during the mid-stage.

Dermira is now left with two drug candidates to focus on, one of them being DRM04, which is intended to reduce sweating in kids. The company has completed the clinical testing of this treatment and is awaiting an approval from the FDA for marketing. If the company gets an okay from the FDA, the drug will be launched during the second quarter of this year.

Another drug in the pipeline is for skin inflammation, called ‘lebrikizumab’. But before investors pass their judgment on these two projects, it is important to see how the company progresses after the big loss of its acne experiment.