Earnings of Dropbox (Nasdaq: DBX) increased and exceeded estimates in the first quarter as solid user growth pushed up revenues. The company’s stock was up 8% during the extended session Thursday, after the stronger than expected results spurred a rally. 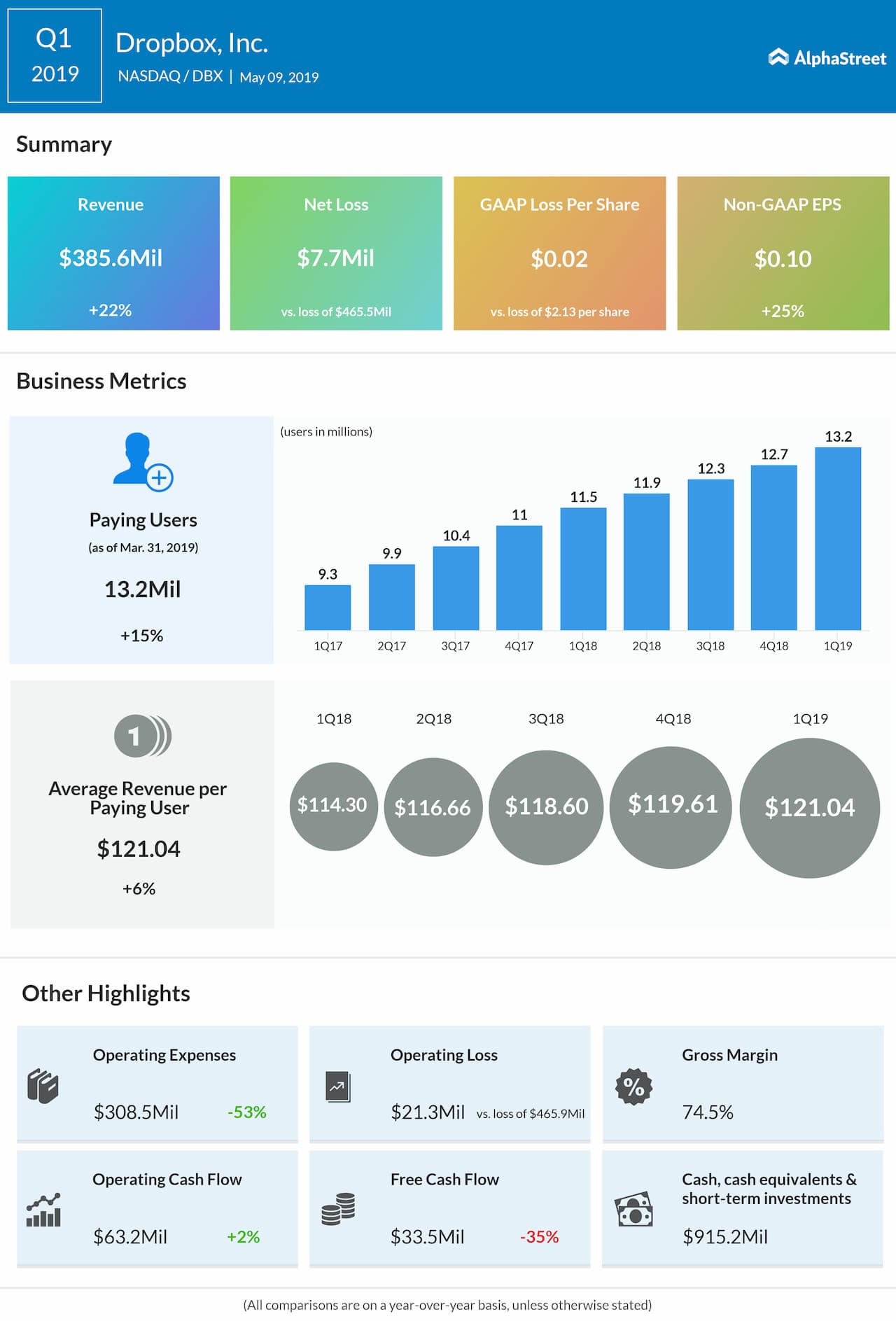 The file hosting service provider, headquartered in San Francisco, California, reported adjusted earnings of $0.10 per share for the quarter, up from last year’s $0.08 per share. On a reported basis, it posted a net loss of $7.7 million or $0.02 per share, compared to a loss of $465.5 million or $2.13 per share in the corresponding period of 2018.

The improvement reflects a 22% growth in first-quarter revenues to $385.6 million. The results came in above Wall Street’s forecast. At 13.2 million, the number of paying users was up 15% from last year. The average revenue per paying user was $121.04, compared to $114.30 in the first quarter of last year.

The company’s stock was up 8% during the extended session Thursday, after the stronger than expected results spurred a rally

Drew Houston, chief executive officer of Dropbox, said, “We’ve reached a scale few SaaS companies have achieved and continue to ship product experiences that put Dropbox at the center of our users’ workflows. We also closed our first acquisition as a public company with HelloSign, and I’m excited about our future together.”

In February, the company acquired JN Projects (HelloSign) for $230 million, which provides an e-signature and document workflow platform. The deal expands Dropbox’s content collaboration capabilities to include additional business-critical workflows.

The fact that Dropbox maintained strong liquidity and kept debt under check, despite making heavy investments in growth initiatives and buyouts, indicates that the management is adopting a balanced approach towards expansion.

Box Inc. (BOX), Dropbox’s main competitor, is all set to publish financial results for its first quarter on May 29 after the closing bell.

In recent quarters, the improvement in bottom-line performance and solid cash flow boosted investor sentiment. Dropbox’s shares, however, maintained a downtrend since they were listed more than a year ago. The stock, which lost about 25% in the past twelve months, gained sharply after Thursday’s earnings report.

Earnings calendar for the week of May 17

Benchmark stock indexes pared their recent gains early this week amid elevated inflation concerns, but regained a part of the momentum later aided by recovery in tech stocks. The Dow

Media behemoth The Walt Disney Company (NYSE: DIS) reported second-quarter revenues that declined from last year as customers stayed away from theatres and parks due to pandemic-related safety issues and