Investors sent Dropbox (DBX) shares down as much as 10% as it opened trading on Friday, concerned over the departure of COO Dennis Woodside. Along with its second-quarter earnings results on Thursday, the company had announced that Woodside, who has been with Dropbox since 2014, will be stepping down in September.

The stock had fallen almost 6% during late trading on Thursday following the announcement.

Before joining the file-hosting giant, Woodside has held executive positions at Motorola and Google (GOOGL).

Dropbox CEO Drew Houston said, “He’s helped transform Dropbox into a publicly-traded company with over $1 billion in annual revenue and 12 offices around the world. Dennis will always be part of the Dropbox family, and we wish him all the best.”

The company added that it does not intend to hire another COO, as two of the senior members would be promoted to take charge of Woodside’s duties.

Dropbox shares had gained 21% since its March IPO, before the announcement of the COO departure. 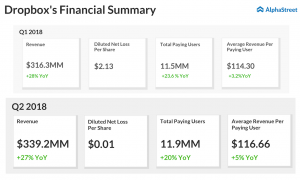