Earnings calendar for the week of July 26

After showing weakness at the beginning of the week, benchmark stock indexes made steady gains even as economic recovery gathered steam. On Friday, the S&P 500 index crossed the 4,400-mark for the first time while the Dow Jones Industrial Average moved past 35,000 and reached a new high. Meanwhile, weekly jobless claims increased unexpectedly to around 419,000, dampening hopes of labor market recovery.

In another tech deal, Microsoft agreed to acquire security start-up CloudKnox. Meanwhile, Visa clinched a deal to buy Currencycloud for about 700 million pounds.

The airline industry dominated the earnings scene this week, with United Airlines reporting results on Tuesday and Southwest Airlines and American Airlines releasing their second-quarter statements on Thursday. Earlier, IBM came out with positive numbers for its most recent quarter on Monday. The next day, all eyes were on streaming giant Netflix, which published mixed results in the after-hours.

While Lockheed Martin is probably the only major company to report earnings on July 26, the market will be closely following the report of Alphabet on July 27. The Google parent will be joined by gadget giant Apple, chipmaker AMD, Starbucks, and Microsoft in the after-hours. Before the opening bell, aviation firm JetBlue and engineering behemoth General Electric are scheduled to report earnings.

The financial releases of Bristol-Myers Squibb, aircraft builder Boeing and Ford Motor are the key events slated for July 28. The next day is going to be as hectic, when the earnings announcements of e-commerce giant Amazon.com, Altria Group, Yum! Brands and Merck & Co. are on tap. Procter & Gamble, oil giant ExxonMobil and Caterpillar are among the major companies preparing to report on July 30. 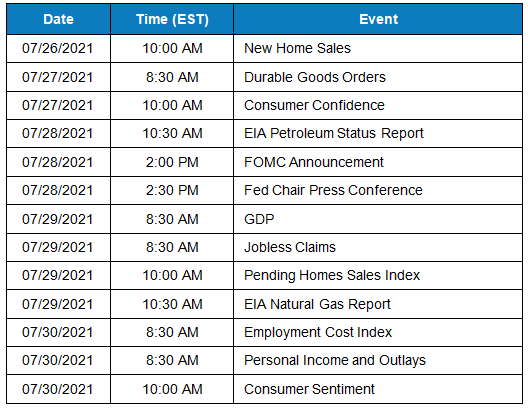