Earnings Preview: Amazon is heading towards a strong Q3

Amazon.com Inc. (AMZN) is scheduled to post its third quarter 2018 earnings results on Thursday, October 25. On a year-over-year basis, the company’s revenues are expected to grow 30.2% to $56.9 billion and earnings are expected to see a massive improvement of over 500% to $3.29 per share.

In the second quarter, the company delivered remarkable earnings growth which surpassed analysts’ expectations but sales missed the mark, despite growing 39% to around $53 billion.

The company has never missed market estimates on earnings in the past four quarters and is expected to continue this trend for the third quarter as well. The third quarter was a good one for Amazon. The company achieved an important milestone by joining the $1 trillion-market value club along with Apple (AAPL). 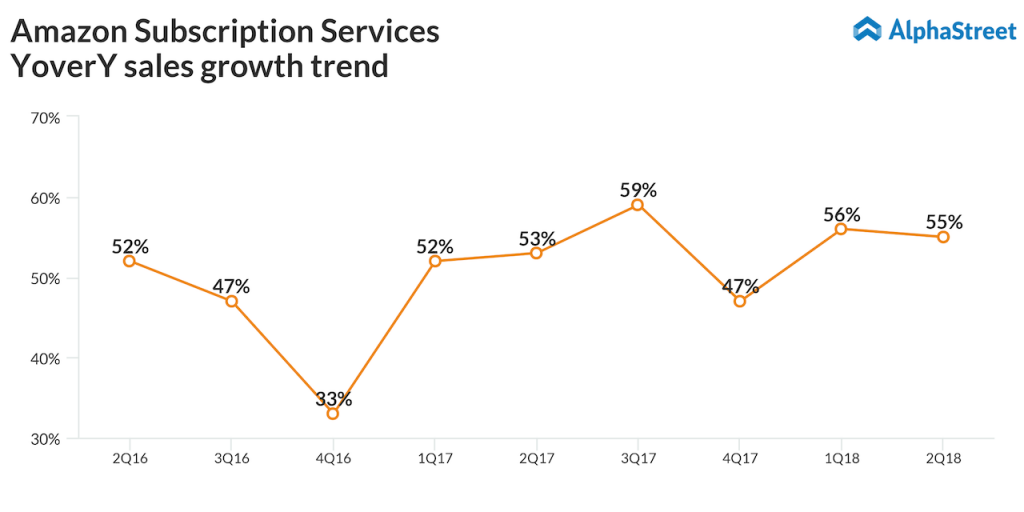 This quarter also includes sales from Prime Day, one of Amazon’s biggest shopping events, which is expected to be a significant contributor to revenues. Prime has been a strong driver of Amazon’s subscription business, which grew 57% in the second quarter of 2018.

Amazon’s Prime Video service competes with Netflix and the online retailer is getting ready to compete with upcoming streaming services from other major media and telecom companies by investing significantly in its content and by striking new deals.

In cloud computing and technology, Amazon Web Services (AWS) continues to lead in terms of market share, ahead of Microsoft’s (MSFT) Azure and Google Cloud. AWS grew 49% to over $6 billion in the second quarter on a year-over-year basis. In September, Amazon launched a set of Alexa-equipped hardware products in Seattle. Alexa continues to give tough competition to Apple’s Siri and Google Assistant.

Other areas of growth include advertising and Amazon Business. In advertising, Amazon’s share of the digital ad spend market in the US is expected to increase meaningfully going forward and the company’s business-to-business platform is set to see good growth as well.

After achieving the top position in ecommerce, Amazon is now investing in physical stores. After opening bookstores and cashierless Amazon Go stores as well as gaining a store footprint through the Whole Foods acquisition, the company opened a new 4-Star store in New York at the end of last month. Amazon will continue the expansion of its brick-and-mortar stores which will prove beneficial to its business.

It has not all been smooth sailing for the giant. In October, Amazon was accused by eBay of poaching merchants and the company also took a huge hit from a massive stock decline in the technology sector. Two weeks ago, Amazon’s stock dropped 6% wiping out $56 billion from its market cap, the highest loss in the FAANG group.

Despite these setbacks, Wall Street seems to have faith that Amazon will grow its profits alongside its many investments and that the company will be helped by its leadership in the technology space. Amazon’s shares have climbed 53% thus far this year but in the past one month, the stock has dropped 6%.