Earnings Preview: Is there hope for J.C. Penney?

J.C. Penney Company (JCP) is set to report its second-quarter 2018 earnings results on August 16. The company posted a loss of $78 million or $0.25 per share in its first quarter. Revenues dropped 4% hurt by several store closures undertaken in 2017. Comp sales saw a slight increase but were impacted by cold weather during the period.

The retailer lowered its full-year 2018 adjusted EPS guidance to a range of $0.07 loss and $0.13 earnings from the previous EPS estimate of $0.05 to $0.25. For the second quarter, analysts are expecting revenues to come in just under $3 billion, which will reflect a drop of 3%. They also expect the company to report an adjusted loss of $0.05 per share.

Shortly after reporting its first-quarter earnings, J.C. Penney saw the departure of its CEO Marvin Ellison, who left to take up a position with Lowe’s Companies (LOW). The disappointing results and the abrupt CEO exit took its toll on the stock, which tumbled 12% after the earnings release and 5% after the CEO departure.

J.C. Penney has been struggling in a retail environment that is facing fierce competition from online retailer Amazon (AMZN). The company has been trying to lift its profits through cost-cutting and store closures. J.C. Penney has also been making improvements to its home and beauty categories, which include opening several new Sephora stores and adding new brands and products.

J.C. Penney sees good opportunity in the baby care market and is adding more products to its baby care assortment

Earlier this month, J.C. Penney said it was opening close to 500 stores in the vicinity of the erstwhile Babies R Us stores, a move seen as an effort to capitalize on the latter’s store closures. J.C. Penney said it sees good opportunity in the baby care market and is adding more products to its baby care assortment.

Taking all factors into consideration, it can be assumed that J.C. Penney might see some benefits from the strategic efforts it is taking, but these might not be enough to bring about a significant turnaround in the results for this quarter. The stock dropped 11% during early morning hours.

J.C. Penney’s rival Macy’s Inc. (M) reported its second-quarter results today and even though Macy’s beat market estimates on sales and earnings, its stock dropped more than 14% in early trading. The trade war is said to be walloping retailers with commodity prices and tariffs. Shares of several retailers fell, with Nordstrom (JWN) dropping more than 6% and Kohl’s Corp. (KSS) slumping more than 7%. Even Amazon took a hit by more than 2%. 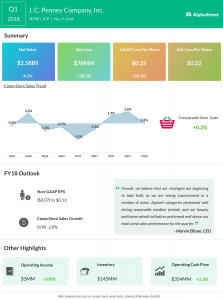