After losing several million dollars in a stock selloff that followed CEO Elon Musk’s controversial earnings call nearly three months ago, Tesla will be reporting its second-quarter results Wednesday after the market closes. While the electric car maker is expected to remain in the negative territory, the optimists among shareholders will be closely watching the company’s cash flow situation.

The recent escalation of the ongoing conflict between Tesla-lovers and the skeptics makes it one of the most eagerly-awaited earnings announcements this season. It seems investor sentiment has been influenced more by the social media posts of the two groups than Musk’s controversial rants.

Wall Street analysts expect the Silicon Valley firm to report a loss per share of $2.81 for the second quarter, representing a deterioration from the year-ago quarter when it registered a narrower loss.  The estimate takes into account investments that went into retooling of the Model 3 production plant, especially re-engineering of the facility after the high-tech automation misfired.

While Tesla is expected to remain in the negative territory, shareholders will be closely watching the company’s cash flow situation

Revenues are estimated to increase by about 42% year-over-year to $3.97 billion with initial estimates showing that the company’s vehicle shipments surged more than 80% during the three-month period. Meanwhile, the market remains speculative about the energy storage and services businesses.

While Musk continues with the cash-burning diversifications programs and investments, Tesla’s sustained growth in the highly competitive auto industry and high valuation make it a sought-after stock. However, the post-earnings scenario will depend a lot on whether Musk walked the talk on the promise he made during the last earnings call – to control spending and enhance liquidity.

The cost reduction achieved by the recent layoffs and restructuring is insufficient to compensate the costs incurred for ramping up the Model 3 production line, which also leaves the stakeholders wondering how many new orders the company might have received for its popular sedan.

RELATED: Tesla lays off 9% of employees

Going by the reports of order cancellations and customers demanding a refund, the company will have to take additional measures to attract buyers.  It is estimated that 18,440 units of Model 3 were delivered in the second quarter after long delays and multiple deadline misses. It is expected that Musk will shed some light on the order situation during the conference call.

The past twelve months saw a reversal of the positive trend Tesla’s stock witnessed during the initial years. The stock lost about 10% since the beginning of the year and is currently trading below its 200-day moving average. 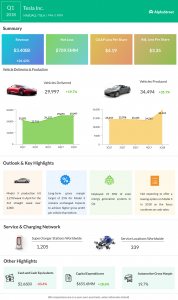