Starbucks has been struggling with weak sales in the US for last few quarters. Offering more cold beverages and new lunch items barely changed anything for the coffee chain, as it had to scale back store growth and close some underperforming company-owned cafes in densely populated areas. Here’s what to look for when SBUX posts its fiscal fourth-quarter earnings after the markets close on Thursday, Nov 1.

Investors, of recent, aren’t impressed by Starbucks’ run. Expectations are that the coffee titan is set to post its second consecutive year of disappointing global sales growth. With the US segment crawling and comp-store sales falling in China, it is not really going as planned. 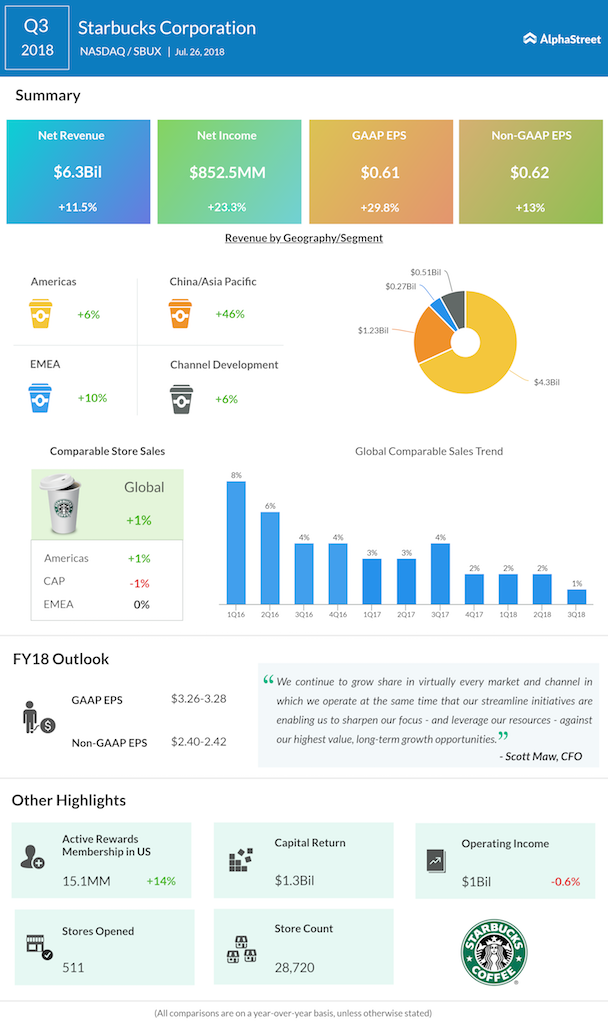 Starbucks, which usually closes about 50 stores a year, is expected to shutter about 150 the coming year. Along with it, it plans to cut down on its new licensed stores to around 100.

Starbucks is also facing heavy competition from McDonald’s (MCD) and Costa Coffee in the US, something any amount of waving a magic flag hasn’t seemed to slow down.

However, the team is expecting business to recover due to “drink innovations” and a new delivery platform in China. Investors will be on the lookout for projections on how it is going to tackle the new holiday quarter.

With new finance chief on board, Starbucks restructuring heats up

The $900-million bet!
Earlier this month, activist investor Bill Ackman of Pershing Square Capital revealed that his fund had 15.2 million shares of Starbucks (SBUX). At the time, it was worth about $900 million.

A brew to look for?
Starbucks seems to have done a lot of work, including making drastic changes to its offerings, ramping up the food menu and coming up with innovative new beverages. The company also found a delivery partner in China, and is looking to expand beyond large US cities. On the financial front, it shifted to lifting spending on direct shareholder returns such as dividends and stock repurchases.

All these moves could help Starbucks achieve a healthy long-term rebound, with rivals McDonald’s and Dunkin’ Brands Group enjoying bouts of growth rebounds lately. However, a stable comeback is only possible if the coffee chain gets its game right with its core US market – something that everyone will have an eye for when the posts results this week.