Earnings preview: What to watch for in TripAdvisor’s Q4 results

Investors holding TripAdvisor (TRIP) shares had a good run in the trailing 52 weeks when the stock gained as much as 58%. This compares with the S&P 500 index, which grew just 2% during the same period.

The company is scheduled to report fourth-quarter results on February 13, Wednesday, after the regular trading hours. The travel firm is expected to post top line growth of over 7% to $344.1 million. Earnings are, meanwhile, projected to increase five times to 30 cents per share.

Market observers hope a healthy US economy complemented by a strong job market would spur travel demand, and in turn, TripAdvisors’ results.

Investors will look forward to continued growth in the non-hotel business, which has been seeing steady growth over the past few quarters, even though its accounts for just over a quarter of its total revenue. During the first, second and third quarters of this year, the non-hotel business grew 36%, 22%, and 20% respectively. In Q4, analysts expect growth of around 25%. 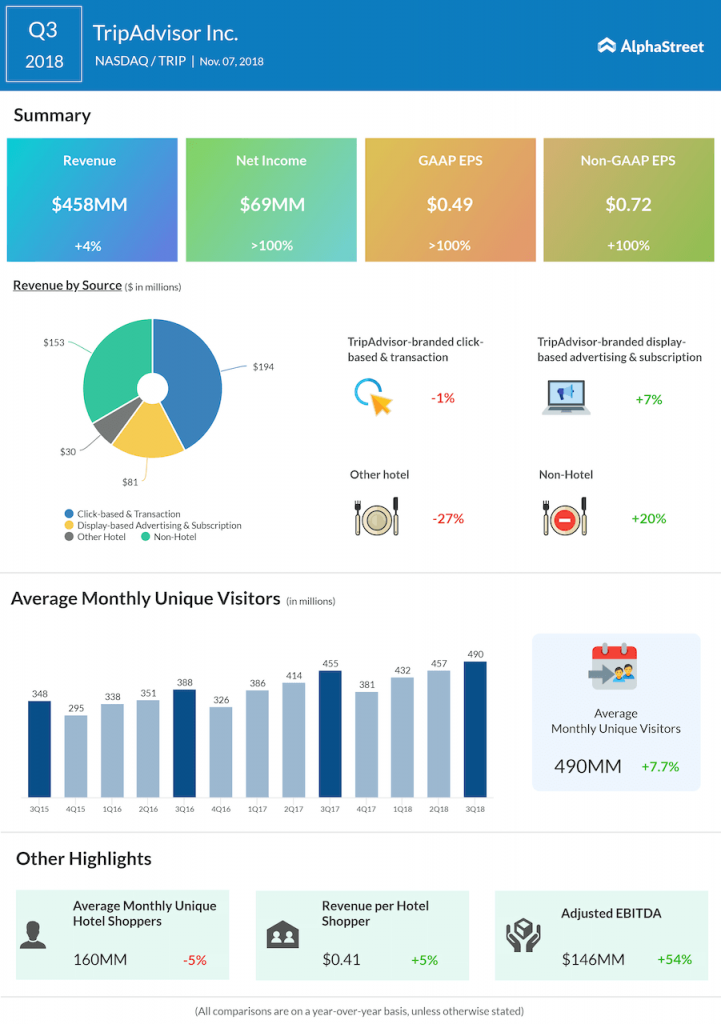 However, the core hotel business has been witnessing softness as of late. Revenue from hotel business fell 5%, 4% and 2% in Q1, Q2, and Q3 respectively, primarily due to slow-growth marketing initiatives as well as its transition into a mobile-based service.

During the post-earnings conference call, look out for management commentary on the market conditions going ahead, as well as its strategy to overcome the weakness in the hotel business.

TripAdvisor (TRIP) shares jumped 12% after it reported huge earnings beat in the third quarter. Earnings stood at 72 cents per share, compared to 48 cents per share expected by analysts.

Total revenue grew 4% to $458 million driven by solid performance in the Non-Hotel segment, but missed analysts’ projection of $469.1 million.