Earnings preview: What to look for when Dropbox reports Q1 results

Dropbox (Nasdaq: DBX) improved its financial position in almost every quarter after going public last year, adding to the prospects of a near-term turnaround. All along, there has been a steady increase in the number of paying users and the revenue earned from each user.

The file hosting service provider will publish results for the first quarter of 2019 on Thursday evening. According to market watchers, it will be another quarter of stable bottom-line performance for the company. The estimated earnings number is $0.07 per share, down by one cent compared to last year. Revenues are projected to grow about 20% to $381.6 million. 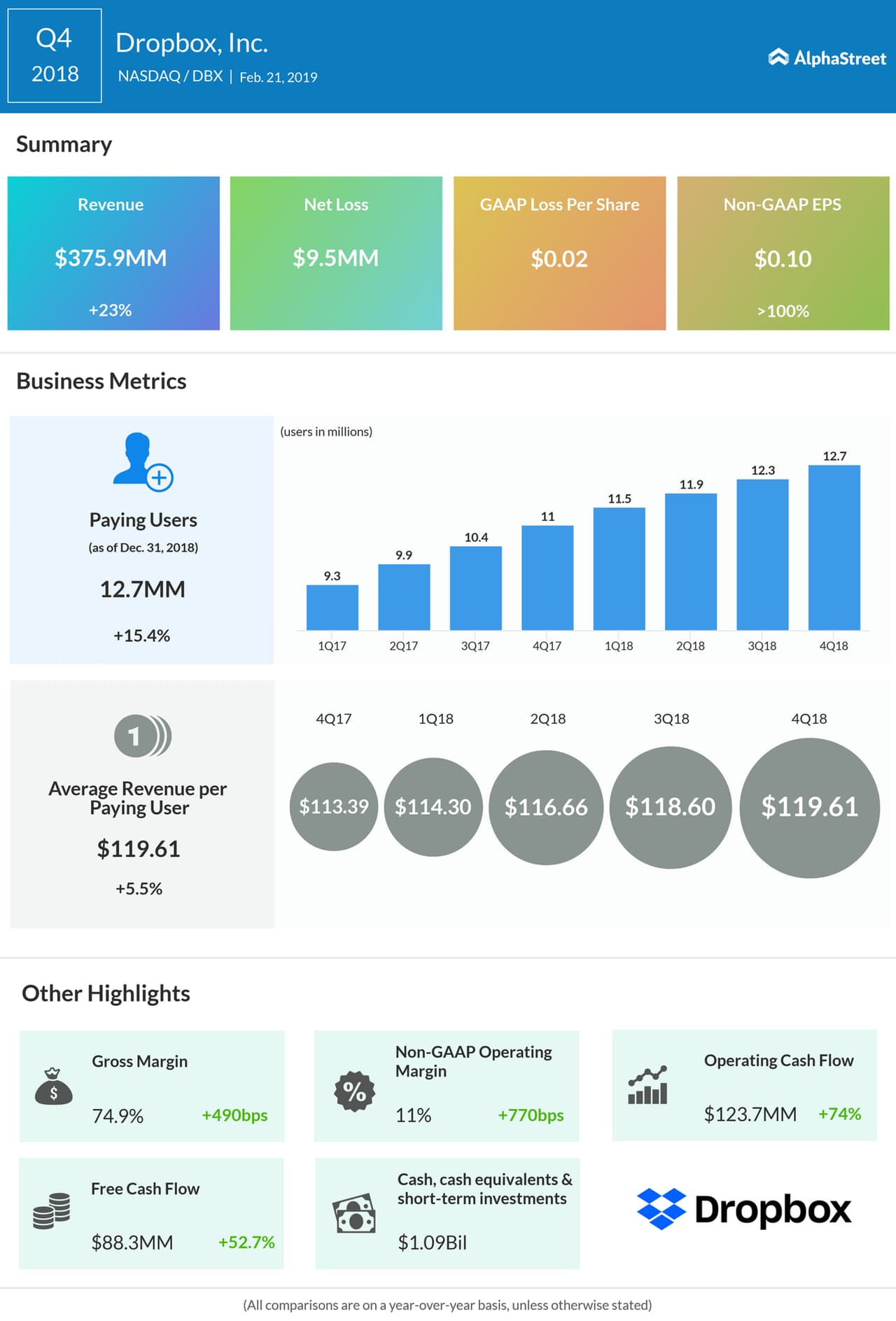 In the recent quarters, the improvement in bottom-line performance and solid cash flow added to investor sentiment, driving the stock higher after the earnings reports. The fact that Dropbox managed to maintain liquidity and keep its debt under check, despite making heavy investments in growth initiatives and buyouts, indicates that the management is adopting a balanced approach towards expansion.

In the recent quarters, the improvement in bottom-line performance and strengthening cash flow added to investor sentiment

Following the most recent quarterly report, there were concerns in the market about the below-consensus margin guidance for the first quarter and fiscal 2019. And, the dismal mood reflected in the performance of the stock in recent weeks. While improving margins, the company also has to formulate an effective strategy to take on the likes of Google and Microsoft who already offer feature-rich file-sharing services.

Dropbox will have to literally grab market share from the tech biggies before strengthening its foothold in the sector. That would require aggressive promotional activities including competitive pricing, which will, in turn, put additional strain on margins.

Earnings, excluding special items, moved up to $0.10 per share in the fourth quarter as revenues jumped 23% to $376 million. On an unadjusted basis, net loss narrowed to $0.02 per share from $0.19 per share a year earlier. The general perception is that the company will emerge from the negative territory towards the end of next year and start reporting positive earnings from 2021.

Box Inc. (BOX), Dropbox’s main competitor, is all set to publish financial results for its first quarter on May 29 after the closing bell.

A clear downtrend is visible in the movement of Dropbox’s shares since they were listed more than a year ago. So far, the stock has lost about 23%. Though the trend reversed at the beginning of the year, the recent weeks were marked by high volatility.