FAST Stock: A look at the pros and cons of investing in Fastenal Company

Fastenal Company (NASDAQ: FAST), a leading manufacturer of threaded fasteners like screws and other hardware, has constantly expanded its presence in the non-US market. In the last decade, the company’s international revenue more than tripled and crossed the $1-billion mark for the first time in 2022.

When the widespread stock selloff battered markets, Fastenal was not spared. Shares of the Winona-headquartered industrial supplies provider dropped from their peak and lost about 16% in 2022. However, they performed better than the broad market even as the company stayed largely unaffected by the market challenges.

Fastenal belongs to the Industrial Machinery & Equipment industry and has a market cap of about $28 billion. The manufacturing and machinery businesses are recovering gradually after being hit by the pandemic, and the trend is expected to accelerate as the post-pandemic market reopening gathers steam. Underscoring the favorable demand conditions, the company maintained stable sales during the crisis period and mostly delivered bigger earnings than widely expected.

The question investors would be asking is whether the positive factors will translate into shareholder value. The stock is unlikely to make significant gains this year since most of the potential tailwinds have already been factored in. For those who own the stock, it is advisable to hold on and keep a close watch on the company in the coming months, while prospective investors should wait for a better entry point. 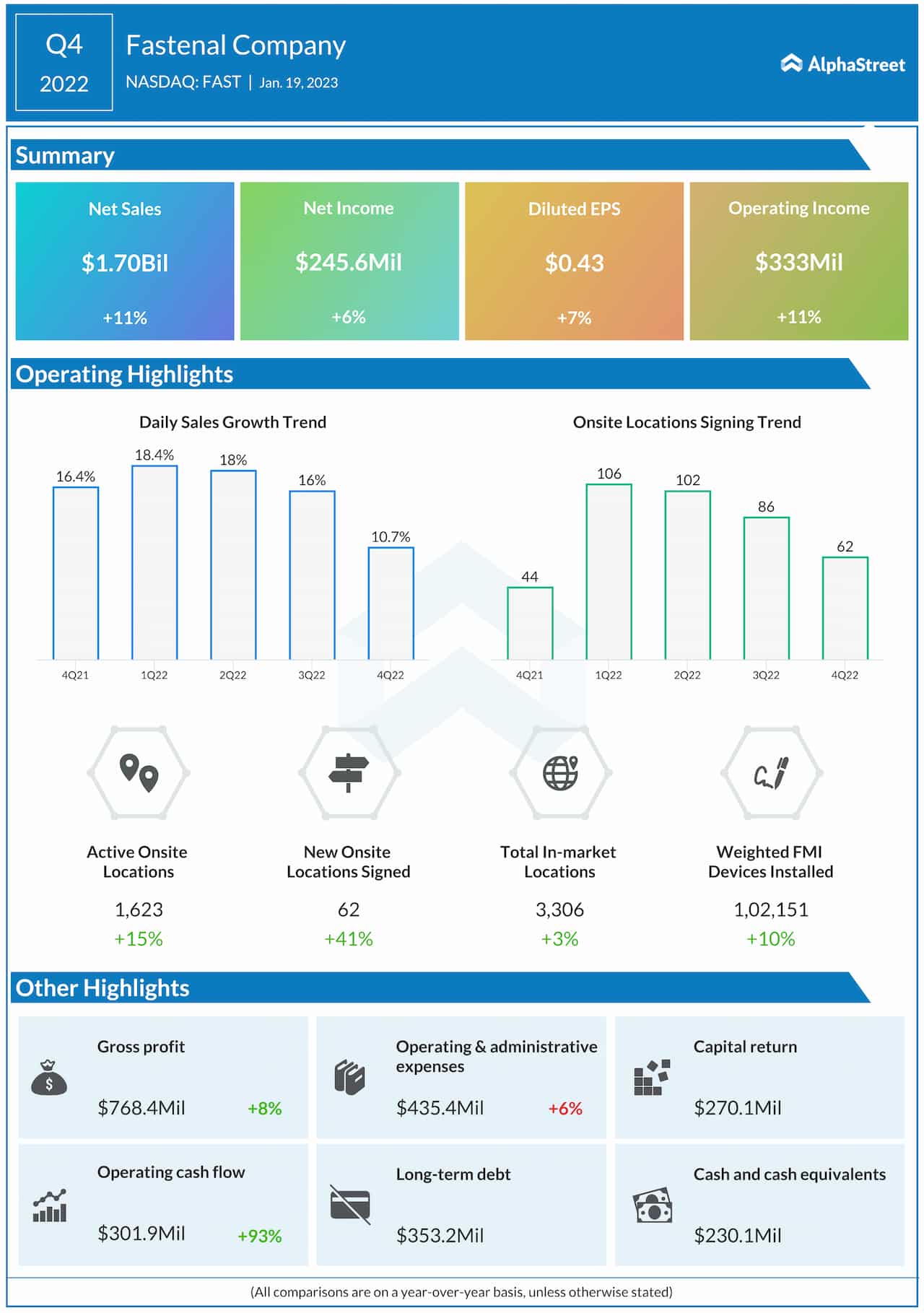 That said, being part of a thriving industry, Fastenal’s future prospects are good. The impressive dividend yield of around 3% adds to the stock’s appeal as a dependable long-term investment. Of late, the demand for industrial capital goods and commodities has been quite stable, which more than offset softness in the consumer goods market and slower growth in construction.

Fastenal ended fiscal 2022 on a rather positive note, reporting higher earnings and revenues for the fourth quarter. Earnings rose 7% from last year to $0.43 per share on revenues of $1.70 billion, which rose 11% year-over-year reflecting higher unit sales. Operating cash flow more than doubled to about $300 million.

Stock Analysis: Is Coca-Cola Company a good buy this year?

Nevertheless, in a sign of underlying softness, daily sales growth and the rate of onsite locations signings decelerated for the third consecutive quarter, dampening investor sentiment to some extent. Also, the gross margin declined to 45.3% from 46.5% last year mainly due to lower margins realized from sales to onsite customers and national account customers, as well as unfavorable price-cost balance.

Fastenal’s stock declined in early trading on Thursday, despite the company’s reporting better-than-expected results for the fourth quarter. It had a volatile start to 2023 and has lost about 3% so far.