Fitbit shines even as it dials down outlook

In a market session that saw Garmin fly high with earnings, the day got better for the wearables market after Fitbit (FIT) went up as high as 1.6% in trading post-market-close on upbeat first-quarter results.

The wearables maker beat the street consensus for loss per share (adjusted). The net loss, however, inflated to $80.9 million from $60.1 million the same quarter last year. 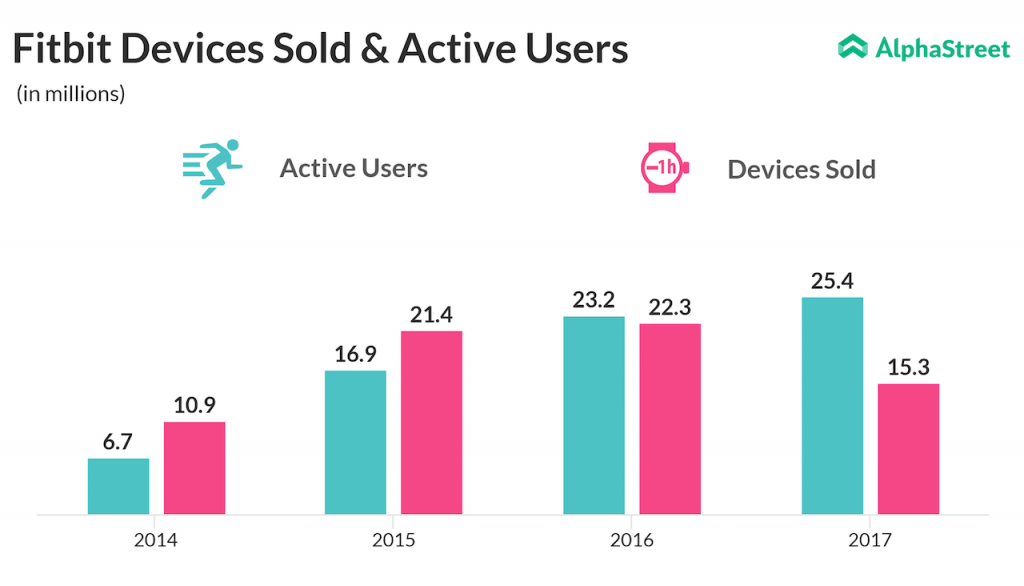 In the first quarter, Fitbit sold 2.2 million wearable devices at almost $112 per device — with the average selling price 16% higher than a year ago. This was achieved by a healthy mix of watches and wearables.

Fitbit is seeing a shift to more products as the Ionic, Versa and Aria 2, and the accessory Fitbit Flyer — all launched last year — made up 34% of the quarterly revenue.

As the wearables veteran expects “reduced demand by the channel for trackers,” revenue is estimated to slide 19% year-over-year and to be in a range of $275 million to $295 million in the second quarter, generating a loss of $0.27-$0.23 per share.

Fitbit, however, did not change its fiscal year 2018 revenue guidance of $1.5 billion. The trend of increasing selling prices seem to be still on, as the wearables maker expects it to grow. It’s a bright place on the cash front as well, as Fitbit expects free cash flow to slip lower than revenue, seeing a breakeven in the year. 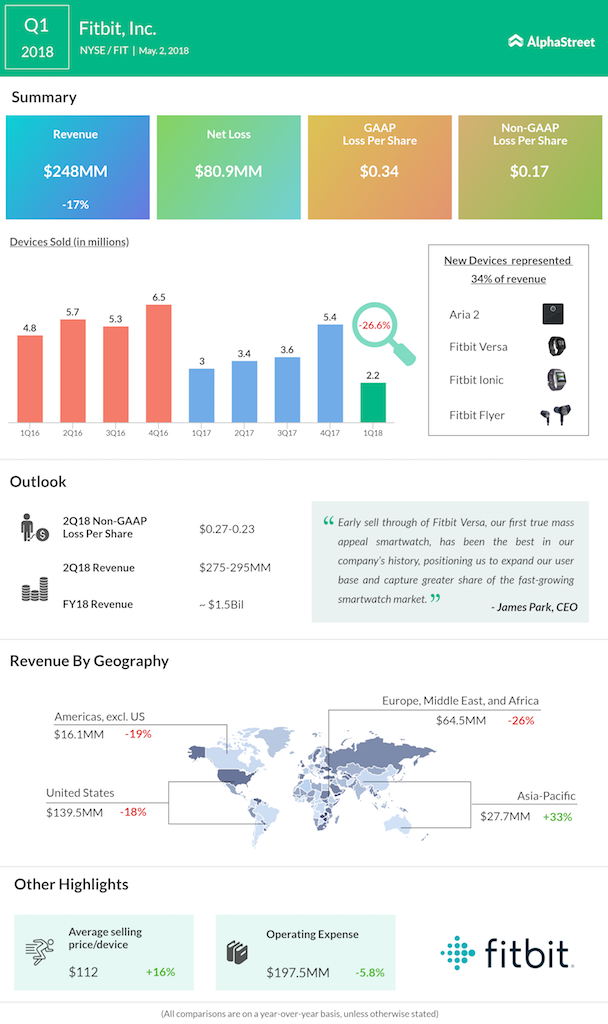 The east is calling:

Much of Fitbit’s revenue in the second quarter was made outside the US — 44% of it, to put a number to it. In total, international topline slipped 16%. But the offsetting factor was the Asia-Pacific region (APAC), as revenue jumped 33% to $28 million.

Last week, AlphaStreet reported that Fitbit was aiming for a title in the competitive smartwatch space with its ‘Versa,’ which is compatible with both Android and iOS devices. According to the company, the device, along with Aria 2, contributed to more portion of the revenue.

Learning from the mistakes:

The disaster that was Ionic, was even CEO James Park’s concern. Though Ionic carried many features currently present in Versa, it failed to appeal to the consumers. Fitbit quickly learned from it and employed quick but effective changes to the Versa. This is a fresh perspective for the company in course correction, and it looks like the healthy choice has indeed paid off.

Fitbit this week announced the adopting of Google Cloud Healthcare API into its fitness tracking devices. While this is a technological leap for the company, it will also doctors to monitor persons wearing Fitbit devices in real time. Looking at how this is going, we could see a revenue jump (if the product doesn’t end up like the Ionic disaster, that is,) in the coming quarters.

As formidable players such as Garmin (GRMN) enter the market with all guns blazing, veterans such as Fitbit has to beat both Apple’s brand and the new fast-rising kids. So far, the company has managed to pull its socks up and deliver. It looks like Fitbit is quite a strong player with limited slips, and could be the unwavering stock tree in this technological segment that sees too many spikes and troughs. The consecutive quarter might decide its fate, however, as the wearables market is looking at a race to determine a new hierarchy.