For most investors, General Electric (GE) stock is money down the drain. Even the most optimistic GE bulls have started accepting the ground reality that the company may never recuperate. Even if it does, it is going to be a long while before investors are convinced that this industrial giant is worth betting on. GE is reporting earnings this Friday, and the interest level is at a record low, just like its stock. In fact, investors are showing a stoic resignation toward their ill fate.

Analysts expect the Boston-based firm to report EPS of 18 cents, down from the 28 cents it reported during the year-over period. Revenue is also predicted to decline 1% to $29.25 billion. For once, these figures hardly matter to investors, who will be more keen on updates regarding the outcome of its aggressive divestiture strategy.

GE had recently announced various measures to slim down its complex operations, including a spin-off of its profitable healthcare business, as well as the sale of its 62.5% stake in oil company Baker Hughes (BHGE). This is in addition to the company’s plans to sell off its industrial finance and energy assets.

The burden of producing results falls on the healthcare and aviation units, which have been showing consistent growth over the quarters. Both the divisions will badly need to continue in its growth trajectory, given the stagnation in the power and financial arms of the giant. While unfavorable market conditions batter the power unit, GE Capital recently incurred a massive surprise insurance claims charge.

Both – GE Aviation and GE Healthcare – had reported first-quarter revenue growth in the high single-digit, and they will be hoping to do the same in the second quarter. The units will also need to continue to expand margins if it hopes to capture investor interest. Look out for updates on free cash flow improvement, which the company had promised while cutting the dividend by half in November last year.

RELATED: General Electric needs a well-engineered solution to get back into shape

While all the turnaround plans will doubtlessly help the company improve its financial flexibility, regaining the trust of investors will prove to be a grueling task, especially in the backdrop of consecutive adverse reports including a series of rating downgrades. The S&P Global Ratings had recently given the stock a negative rating, stating that the restructuring would raise volatility in cash flow as well as the profitability of the company.

GE stock has tumbled 49% in the past 52 weeks. CEO John Flannery has a big day ahead. 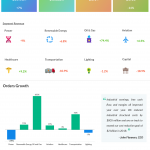