Ever since General Electric (GE) embarked on a mammoth restructuring program last year, its market value has been declining at a pace as huge as the once-prodigious engineering conglomerate. Adding to the slump, the company recorded a double-digit fall in second-quarter earnings, hurt by higher costs. The dismal scenario casts doubts over the chances of a near-term turnaround.

Continuing the losing streak that began in early 2017, GE’s stock dropped sharply on Wednesday, hitting a nine-year low. Last week, the management clinched a deal to divest its power-conversion segment for half the price that was paid for acquiring it, in a sign that the ongoing efforts to stabilize liquidity through divestitures might not be yielding the desired results. Earlier, CEO John Flannery claimed to have achieved the initial target of raising $20 billion through asset sales.

Last week, the company clinched a deal to divest its power-conversion segment for half the price that was paid for acquiring it

For the first time in about nine years, GE’s stock dropped below $12 on Wednesday, when growing pessimism among investors over its recovery prospects triggered a selloff. The loss is about 12% in August alone, and the progressive decline accelerated mid-month.

Meanwhile, the lack of enthusiasm in the market might prompt Flannery to revisit his ambitious turnaround program, which is being implemented with the goal of restricting operations of the company to aviation, power and healthcare, its core businesses.

A closer look at the state of affairs shows that profitability of the industrial juggernaut is being hit hard by the ailing power division, and the latest quarter was no exception. Referring to the power segment, Flannery in the earnings call had said it would be a multiyear fix but assured there was ‘a very clear plan’ of what needs to be done.

It could be a cause for concern as GE’s future will depend a lot on achieving a time-bound turnaround for the power division. The dismal condition also raises fears that the board of directors might go for yet another dividend cut in the near term to rein in outflows. Experts believe that despite the adversities, the only way out for the more than a century old company is more asset sales. 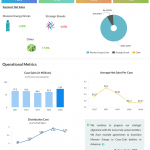