Multinational investment banking titan Goldman Sachs (GS), which named its operating chief David Solomon as successor to executive chief Lloyd Blankfein, reported second-quarter revenue and profit that topped analysts’ estimates. After the initial decline, Goldman stock is up about 0.5% in the pre-market trading.

In line with the bank’s competitors that reported results earlier last week, earnings applicable to common shareholders surged 44% to $2.35 billion, while EPS soared 51% to $5.98. Results were driven by higher trading in equities, wealth management assets, and fees from underwriting of structured debt.

Meanwhile, on a sequential basis, earnings per share for the second quarter declined by 14% mainly due to stellar trading revenues in the first quarter on higher volatility as a result of the pace of interest rate hikes, the geopolitical situation, and trade wars.

In a separate release, Goldman announced that COO David Solomon will succeed retiring Chairman and executive chief Lloyd Blankfein, effective October 1, 2018. Blankfein will step down as executive chief on September 30, 2018, and will retire from the firm and as Chairman at the end of the year. Blankfein, who has been Chairman and CEO since 2006, will accept the title of Senior Chairman after his retirement.

Turning back to results, Goldman’s investing and lending segment, which includes mortgages to illiquid investments in private start-ups, posted a 23% increase in revenue to $1.94 billion. The segment growth was driven by net gains from private equities, and higher net interest income.

In the Investment Banking segment, revenue grew 18% to $2.05 billion. The results were driven by a rise in industry-wide completed mergers and acquisitions volumes, significantly higher net revenues from initial public offerings, and a rise in revenues from debt underwriting.

Investment Management revenue surged 20% to $1.84 billion. This was primarily driven by significantly higher incentive fees, an increase in average assets under supervision and the impact of the revenue recognition standard.

The levies imposed by the President Donald Trump’s administration on imports from China have hurt the consumer confidence. This, along with rising rates had impacted the banks heavily, which expected a slower credit offtake and retail spending. In the first half of 2018, the majority of the bankers have witnessed sequential declines in investment banking fees.

Market analysts expect Goldman to explore more stable areas for generating revenues for improving payouts in the next year. Investor confidence is expected to improve in the upcoming quarters as Goldman has passed its stress tests in 2018 with a condition of not expanding shareholder payouts. 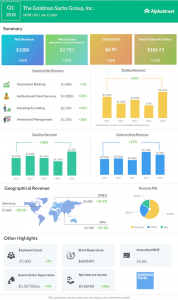