Online marketplace Groupon (NASDAQ: GRPN) is set to publish its second quarter 2019 financial results on July 30, Tuesday after the market closes. Wall Street views Groupon’s earnings to be flat year-over-year at $0.02 per share and revenue to decline 8% from the second quarter 2018 sales of $565.69 million. Groupon stock stayed flat at $3.51 when the market ended today.

Investors will be keenly focusing on what the company reports on units sold, active customer count and traffic in the June quarter. 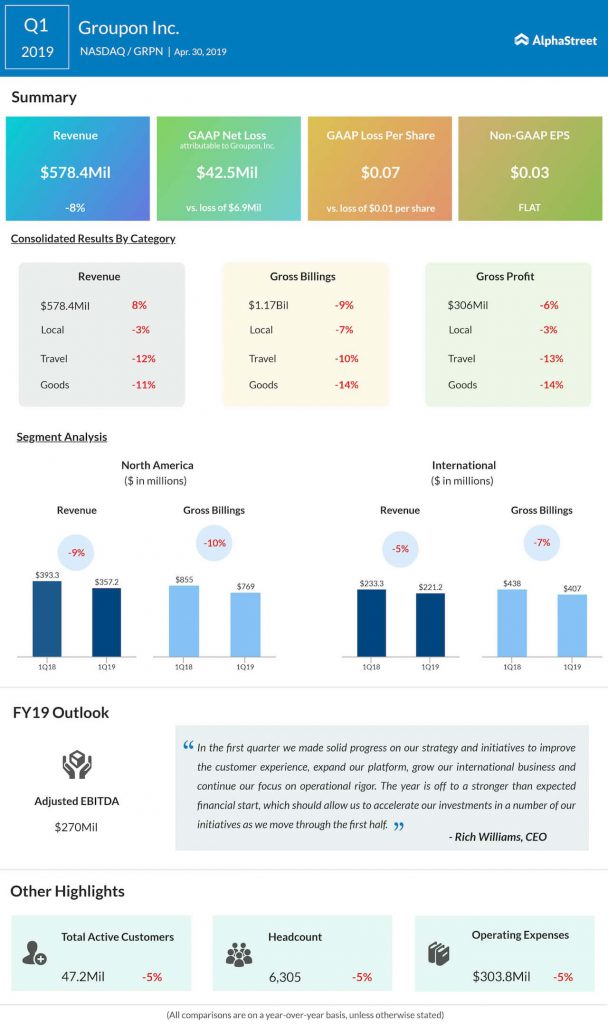 For the first quarter of 2019, the Chicago-based ecommerce company reported adjusted EPS of 3 cents, flat compared with the year-ago quarter and topped the consensus estimates. Revenue declined 8% annually to $578.4 million, but surpassed the Street’s predictions. Gross profit slipped 6% to $306 million in the March quarter.

For the full-year 2019, Groupon reiterated its adjusted EBITDA outlook of $270 million. During the first quarter earnings conference call, CEO Richard Williams stated that the company expects the trends in Q2 for revenue and gross profit to be similar as in the first quarter. He added that Q2 gross profit and adjusted EBITDA would be somewhat lower than Q1 as the company continues to step up its investments.

Global units sold slipped 12% to 37.2 million in the first quarter 2019 as a result of lower traffic and customers. Units in North America were down 18% and International units were down 2%.

Read: Will Beyond Meat keep up the pace of momentum ahead of Q2 earnings?

The daily deal website operator views the first half of this year as a period of accelerating important strategic investments. Groupon expects to reap the benefits of those investments as the year progresses.

Compared to the negative return of 33% in the past 12 months period, Groupon stock had gained 10% since the beginning of 2019.