Diversified aerospace company Lockheed Martin Corporation (NYSE: LMT) is a leading supplier of defense solutions and military equipment to the U.S government. Since its business is influenced by variations in the defense budget, the company follows a strategy focused on prudent cost management and technological innovation.

When the business world was hit by widespread disruption and supply chain crisis during the pandemic, Lockheed Martin was not spared. Sales are affected by the temporary headwinds, but the company is poised to receive large orders from the government given the high demand for defense equipment and combat vehicles. The business model is such that the timing of customer contracts plays a key role in revenue generation.

Lockheed Martin, which makes the advanced F-22/F-35 fighter jets, military helicopters, and carriers, has elicited much investor interest this year for potential gains from the Russia-Ukraine war. However, there is a great deal of uncertainty over the scale of the government’s military spending over the long term.

Lockheed Martin’s stock has what it takes to create strong shareholder value, but the high valuation can be a dampener for price-conscious investors. Citing the short-term risks, market watchers are cautious in their recommendations, though LMT seems to be on its way to hitting a new high this year. 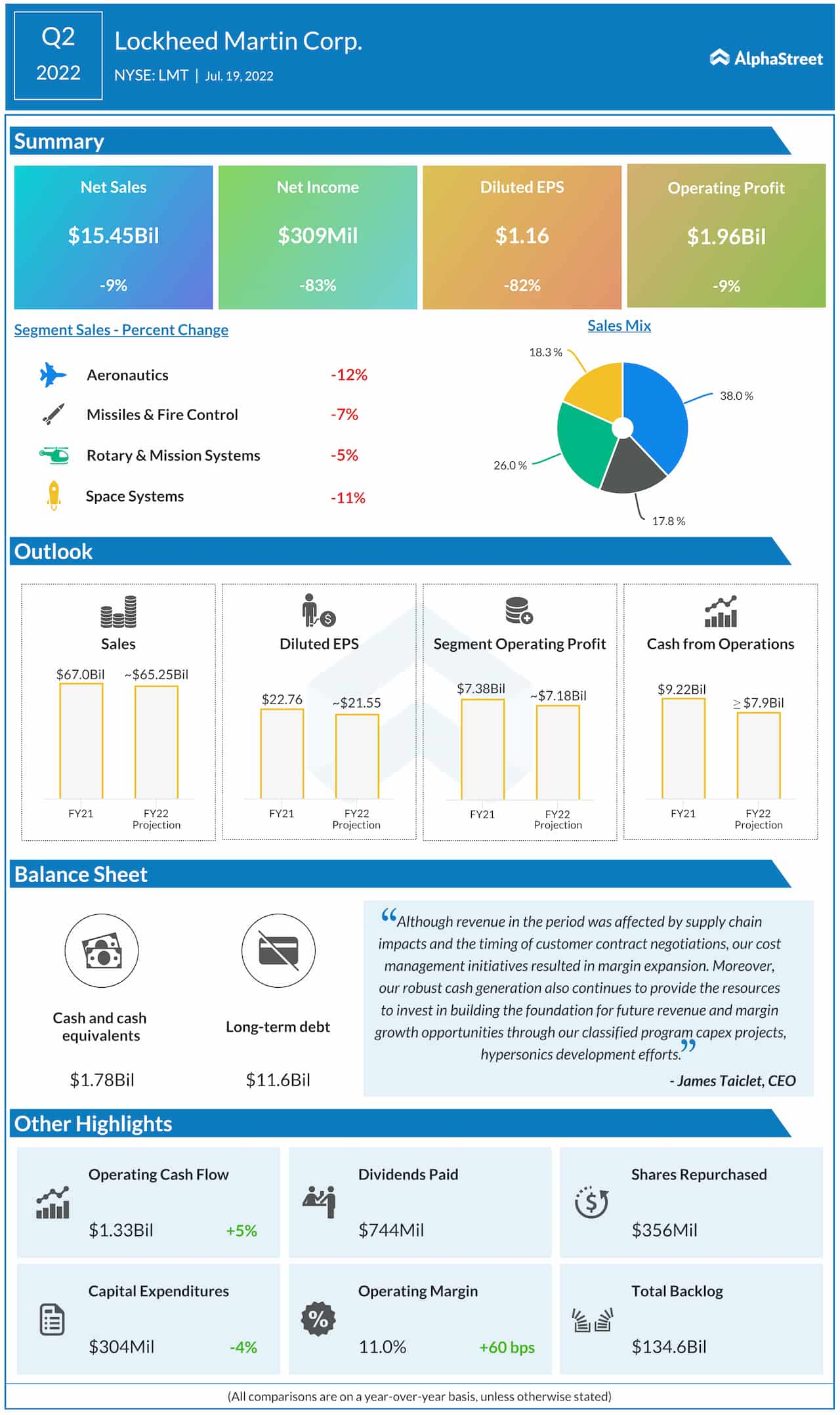 It makes sense to put buying/selling decisions on hold until a clear picture emerges as to how the company performed in the current quarter. The management has warned that third-quarter performance would be negatively impacted if the U.S government did not finalize a crucial contract related to the supply of F-35 aircraft, for which it had signed an agreement in principle earlier. Recently, it received a $2.3 billion multi-year contract to provide the Sikorsky division’s UH-60 Black Hawk helicopters.

The company generates enough cash to fund the heavy investments needed to ramp up the business, which also further strengthens its balance sheet. It is estimated that the management’s aggressive cost-cutting efforts would contribute to bottom line growth in the coming quarters.

Extending the recent downtrend, all four operating segments registered negative growth in the second quarter, dragging down total sales to $15.5 billion. As a result, earnings per share plunged 82% to $1.16 per share. Net income missed the market’s projection after beating in each of the trailing three quarters. Discouraged by the bleak Q2 outcome, the company slashed its guidance and currently predicts that full-year profit and revenues would be below last year’s levels.

“The Ukraine conflict has been a dramatic reminder that we’re in a global power competition and we at Lockheed Martin stand ready to support our nation and its allies with advanced systems and technologies. The US alone has committed more than 5,500 Javelin missiles to Ukraine in defense of their country. And this visit spotlighted the continued need for a focus on global security and deterrence capabilities,” said Lockheed Martin’s CEO James Taiclet.

After peaking in mid-April, the stock retreated in the following weeks and slipped below the $400-mark. The shares, which have gained 11% so far this year, traded slightly higher on Wednesday afternoon.