Shares of HEXO Corp (TSX: HEXO; NYSE: HEXO) are set to hit a new low in today’s regular trading session as the company reported widened fourth quarter loss. The cannabis producer’s loss in the fourth quarter of 2019 expanded to C$56.7 million or C$0.28 per share from loss of C$10.5 million or C$0.05 per share in the fourth quarter of 2018. Revenue surged to C$15.4 million from C$1.4 million in the prior year quarter. HEXO stock plunged about 10% in the pre-market trading session. 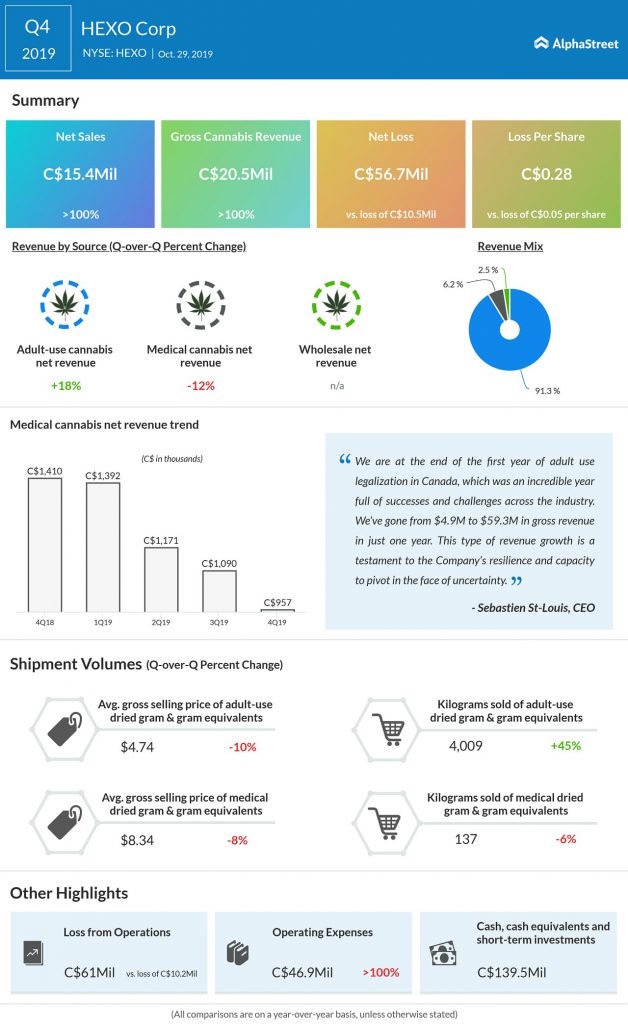 For the first quarter of 2020, HEXO expects revenue to be in the range of C$14 million to C$18 million. The company estimates to achieve positive adjusted EBITDA in calendar 2020.

Operating expenses increased to C$46.9 million from $10.7 million in the prior-year quarter, reflecting the significant increase to the scale of the company’s operations.

During the fourth quarter, HEXO closed the Newstrike acquisition on May 24, 2019. The company also entered into a supply agreement with the Alberta Gaming, Liquor and Cannabis Commission (AGLC) and listed 18 additional products with the Ontario Cannabis Store.

Last week, the company decided to scale back its operations in certain facilities. In order to cut down the costs, HEXO eliminated about 200 positions across its departments and locations. The cuts include the elimination of some executive positions and the departures of Arno Groll, Chief Manufacturing Officer and Nick Davies, Chief Marketing Officer.

Given the current market conditions in Canada, HEXO decided to suspend the cultivation at the Niagara facility, and in 200,000 sq. ft. of the Company’s Gatineau facility.

It’s worth noting that Michael Monahan, who was appointed as CFO of HEXO on May 28th this year, stepped down from his role early this month. The company named Stephen Burwash, the Vice President of Strategic Finance, as the new CFO.